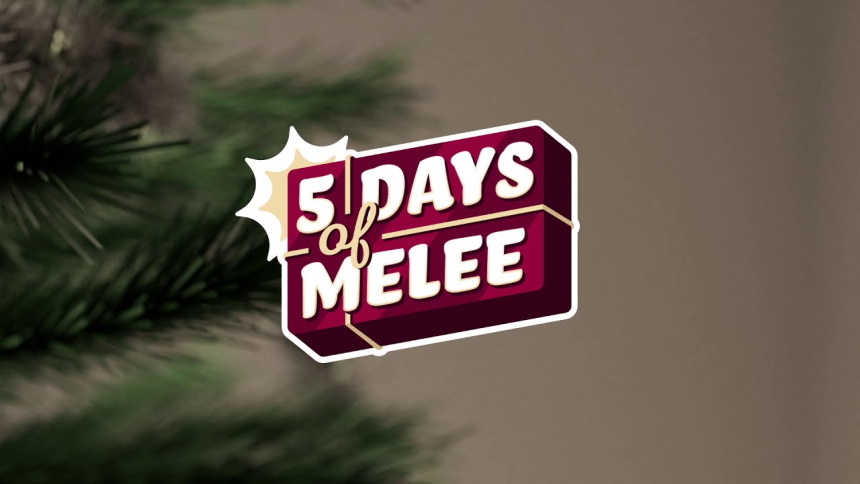 On December 6th, Melee it On Me and Beyond the Summit announced 5 Days of Melee, a five-day stream event celebrating the Melee community and raising money for Direct Relief. The event is set to run from December 14th through December 18th, featuring live Slippi brackets, exhibition matches, panels, single-player Melee exhibitions and even some Project M content.

The planned stream schedule includes three live tournaments - the 5 Days of Melee EU Open, with pools running on the 14th and finals on the 15th, as well as the Ludwig Ahgren Championship Series' North America East and North America West qualifiers on the 16th and 17th, respectively. The schedule also includes showcase matches on the 14th and 18th, Pros vs. Joes events on the 15th and 17th and both a Rishi's Jungle Jam tournament and a Smash Sisters crew battle tournament on the 18th.

For those looking for more than just tournament and exhibition matches, this event has you covered. There are five planned panels throughout the stream schedule, featuring TOs, commentators, content creators and the authors of books about the Melee community, as well as one on representation in competitive Melee and a Smash Ultimate player's guide to Melee. Several podcasts, including The 6-4, The Scar & Toph Show, the MIOM podcast and the Allston Melee Wrap-up. There are also two planned single-player Melee showcases: a combo contest on the 15th and a three-hour-long speedrunning and TAS exhibition starting at noon PST on the 16th, the latter of which will also be rebroadcast starting at 4:45 a.m. PST on the 17th.

On top of all of that, in true Beyond the Summit fashion, there are some planned casual content blocks. Each day will feature a game show with prominent Melee community figures as contestants, as well as stream blocks for both Mafia and Among Us.

For those interested in Project M content, there's a bit less going on there, but what they do have lined up certainly seems worth checking out, with show matches on the 14th, an all-star show match on the 15th and a discussion on the PM metagame and tier list on the 17th.

For more information on Five Days of Melee, including the full schedule and sign-ups for the EU Open and LACS qualifiers, you can visit the event's smash.gg page here.

Nintendo is not going to like this..... I'm happy for another event but why does this make me laugh. Petty on both sides LMAO they like not also melee but also PM

Nito LR said:
Nintendo is not going to like this..... I'm happy for another event but why does this make me laugh. Petty on both sides LMAO they like not also melee but also PM

If there's one thing I've learned from the Melee community, it's that they won't stop just because Nintendo shut down one tournament.

Nito LR said:
Nintendo is not going to like this..... I'm happy for another event but why does this make me laugh. Petty on both sides LMAO they like not also melee but also PM

Heck yeah both sides are petty!

WHY DID I PUT A SANS EMOJI?! I DON'T KNOW!
My thoughts are that this is so crazy, it might just work. Almost like we're just asking Nintendo to do something about it, just for the backlash. Like, light that fire, dudes... Just do it. See what happens.
Odds are Nintendo won't touch it so long as their name isn't attached, so maybe people should tone it down a bit.
Last edited: Dec 8, 2020
...I can hear it now...