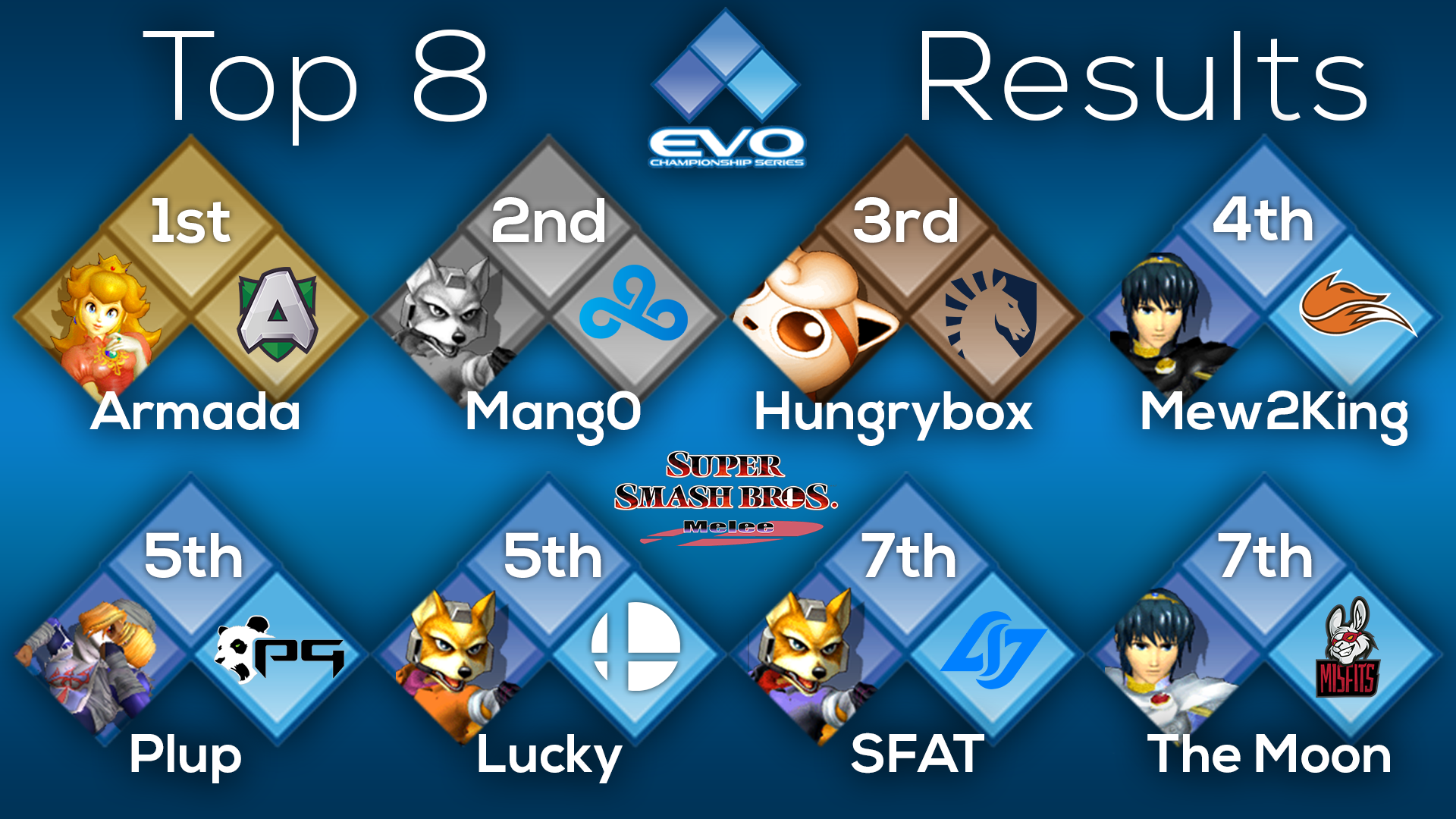 Super Smash Bros. Melee at Evolution 2017 was a tournament that promised high-level Melee, and a showcasing of the best players the world has to offer. It delivered on that promise. EVO gave us heart-pounding sets, and a series of upsets worthy of attention. Here, we go over those who made Top 8, and the journeys they took to earn their positions.

Adam “Armada” Lindgren has secured his second EVO championship in 2017. His victory was expected, given his ranking at number one, and his undefeated streak that lasted seven months in the beginning of 2017. Yet, it was no small feat to accomplish. He had a few matches that gave him more trouble than imagined. MacD, in his Round 2 pools, took him to a final game three. Axe, in Semi-Finals, pushed Armada in several close games. Mew2King proved to be a viable contender to eliminate him in Top 8. In the end, Armada came out without dropping a single set to any challenger. While he had some close calls, he ended up with a definitive lead that proved his place.

If anybody gave the biggest fight to Armada, it was Joseph “Mango” Marquez. Mango has had a rough start to 2017, and some doubted whether he could pull through for EVO. Yet, the old saying still stands. Do not sleep on the kid. For most of the bracket, Mango looked to be in complete control. There were only two players, aside from Armada, that gave Mango trouble. Hungrybox and Prince F. Abu, the strongest Jigglypuff players. It seems that even when Mango is on a hot streak, Jigglypuff is a character that he will struggle with. Yet, character difficulties aside, Mango made a strong case for his number three ranking at EVO. If he continues, Mango may become a powerhouse player in the second half of 2017.

Juan “Hungrybox” Debiedma made a solid third placement this year at EVO. He had a very solid run, with the only players to make him drop games being SFAT, Colbol, and Mango. Hungrybox is in an interesting spot when it comes to his third place. Mango was the only player to make him drop sets, and he never saw Armada in bracket. While losing to Mango is nothing to sniff at, we will never know if Hungrybox could have been the one to take a set off Armada at EVO.

Jason “Mew2King” Zimmerman earned fourth at EVO 2017. Most of his play throughout the weekend was solid and on point. In Semi-Finals, he defeated Leffen 2-0. In Top 8, Mew2King had one of the most nail biting sets against Armada. Last game, last stock, and a victory over Armada was within his grasp. Yet, an interesting edge guard setup was what decided the match. His fourth place finish shows a strong setting for Mew2King, and this will not be the last time we see him place so high for 2017.

Justin "Plup" McGrath places just outside of the Melee Gods this year at fifth. His position as gatekeeper to the top five was both questioned and proven at EVO. He had an early bracket loss against Prince F. Abu, the second best Jigglypuff player. From there, he made a fantastic run against the rest of the cast to reach Loser’s Quarters against Hungrybox. His defeat against Hungrybox means that the only character to defeat Plup at EVO was Jigglypuff. Whether this will be a single instance, or continue into a pattern will be seen in the future.

The other fifth place finisher was a new face to Evo Top 8, Jose “Lucky” Aldama. Lucky was not a shoe-in for Top 8, and his EVO chances were cast into doubt when he was sent to Loser’s by Duck in Round 2 of pools. However, Lucky made an incredible comeback run. After Duck, Lucky managed to defeat multiple players that have given him trouble in the past. His total run had him eliminate Colbol, S2J, Wizzrobe, Prince F. Abu, and finally SFAT. He was eventually defeated by Mew2King in Loser’s Quarters. Couple the run with his steady recovery into high-level Melee, and we may be seeing a lot more of Lucky soon.

Zachary "SFAT" Cordoni ended up taking the seventh place slot. His dedication to improvement has seemed to pay off for EVO 2017. SFAT was able to knock out a player that some assumes would give him plenty of trouble, ChuDat. His early snuffing of ChuDat gave him a chance to face off against Hungrybox in Top 16. While he came out in Loser’s, SFAT pushed Hungrybox to game three. If he keeps the progress up, SFAT may be able to break into the top 3 barrier he desperately wants.

Rounding off our Top 8 is another new face for EVO, Ryan “The Moon” Coker-Welch. The Moon has seen some strong growth for 2017, and it got to be displayed in full at EVO. Like Lucky, he was dropped to Loser’s in his Round 2 pools. Though his run was one game shorter, it is no less impressive. Through Too 48, The Moon managed to eliminate Ice, Android, ChuDat, Duck, and finally Leffen. With the strong diversity of characters, The Moon has shown a strong understanding of lesser known matchups. Most impressive was his victory over Leffen, who was a favorite for making Top 8. 2017 may be the breakout year for The Moon, and EVO has given others high hopes at how far he can go.

EVO 2017 was one of the most stacked tournaments the year has seen yet. It saw Mango go all-in, some new faces in Top 8, and plenty of upsets in the earlier rounds. If EVO is any indicator of how the second half of 2017 will be, then Melee is in a strong place.

The Moon getting into Top 8 by beating Leffen was one of the greater moments at Evo. Also Colbol almost beating HBox wouldve been amazing as well if he pulled it off.
seeing all of the gods, right after eachother in placements looks kinda funny, but i don't know if PPMD attended.
The Captain Falcon meta has reached its limit; I thought the results of last Evo and G4 would see him in a stronger position.
Nice. Good work, Armada, and to all contenders. Was banking on Hbox in the end.
Last edited: Jul 19, 2017

Berni_Alt said:
seeing all of the gods, right after eachother in placements looks kinda funny, but i don't know if PPMD attended.
Click to expand...

sadly he didn't
**** was lit especially if you watched the HyperX SFV x SSBM stream. That **** was amazing
Mango again put on a sorry show as repeat of Genesis in Grand Finals. Hungrybox dropped the ball by being stubborn and overconfident about a strategy that was clearly failing to work. M2K and Armada made the best face-off of the Gods we saw at the tournament. I hope that set goes down in history. It had everything, including and especially M2K finally deciding to stick with his one true main.

I think Melee will be saved if or when PPMD returns with his test levels intact.
>If anybody gave the biggest fight to Armada, it was Joseph “Mango” Marquez
Ahahaha what ahahaha
Guess I'll say it since no one else is: why no recap of SmashU Top 8 as well?

lordvaati said:
Guess I'll say it since no one else is: why no recap of SmashU Top 8 as well?
Click to expand...

synthverity has a "Melee addiction". If someone else cared as much about SmashU, then there'd have been such a post for it as well.

Lord Horatio said:
The Captain Falcon meta has reached its limit; I thought the results of last Evo and G4 would see him in a stronger position.
Click to expand...

That's not entirely a fair statement. You have to look at who they lost to. n0ne lost to S2J. Wizzrobe lost to Axe. Gahtzu lost to DaShizWiz. All strong players.
You must log in or register to reply here.
Share:
Facebook Twitter Reddit WhatsApp Email Link
Top Bottom