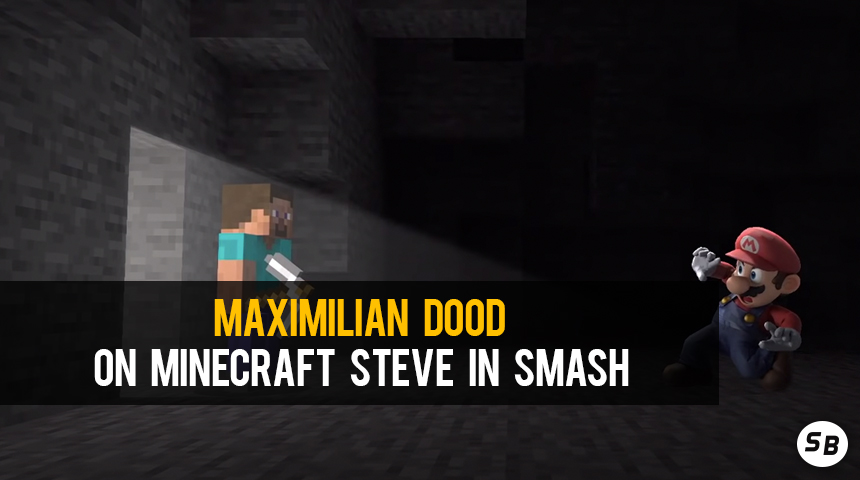 Fighting game YouTuber Maximilian Dood isn’t a stranger when it comes to Super Smash Bros. and has given the series high praise - especially in his reactions to Cloud in Smash 4 and Terry in Ultimate as well as his video we covered previously where he stated Smash is in its “golden era”. So, with Minecraft’s Steve and Alex revealed as Fighter #77 this past week, what did Max have to say?

Warning: Strong language is contained in this video


It wouldn’t be a long shot to suggest that Max wasn’t exactly thrilled to see Steve revealed. However, as the video progresses, we see Max go from confused and mildly upset to rather optimistic and even understanding. Max goes into to say following the reaction video that he is very detached from Minecraft but he understands why the content was included. Like many of us, he was simply amazed by the amount of content included.

Warning: Even more stronger languages is contained in this video


His second video focuses on those upset about Steve, his series and its impact on Smash, and what this exactly means for the game post-Steve/Minecraft. Max goes into the fact that he’s been asked why he didn't cover Minecraft videos on his channel earlier when it was very popular and lucrative. Max simply states that it was never his interest to cover it and games like Fortnite, Minecraft, and League of Legends is a side of gaming he’s 100% not a part of and has no interest in joining.

That being said, he goes on in the video to explain that Steve was “a good call” to add in Smash due in part to Minecraft’s extreme popularity. Max explains further that this decision makes sense from a relevancy, iconic, and marketability standpoint. Max, to nicely put it, calls out people who use “hyper aggression” to target others for not liking or supporting the character they like. This is a mindset that is sadly prevalent not only in the wider community but even here on the site. It’s good to get an outside perspective on the issues within the Smash community.

Author’s Note: I 101% agree with Max here. I’m pretty much open to any character from any series as long as they bring a good amount of content that Sakurai and his team can properly utilize and to show its history and impact. Bring in Naruto and Goku? Sure! Jonesy and Freddy Fazbear? I’ll be on board for that! What matters to me is seeing the happiness and joy from fans and the amount of love and dedication that goes into developing the content. How do you feel? Did you agree with Max? Or perhaps he’s in the wrong? Let us know in the comments!

This guy nailed every one of his points perfectly
I feel he is holding back. Most of the major youtubers who first seemed to not agree to this; are not trying to be "positive" or say it was a joke. MKLeo was smart in never showing his reaction. Sorry, nope, not gonna buy it (their later reactions).
Omni also made a few great videos about Steve in Smash. I saw Max's video too and thought he made some really great points. Even his Sonic diss was well thought out and fair.
I absolutely agree with Max's point in regards to Steve's inclusion in Smash. I too am someone who isn't too attached to the franchise, nor has ever played Minecraft; however I also acknowledge the impact it has in Smash by opening the doors even wider for more players to join in. All Minecraft fans are certainly SUPER hyped to get to play as Steve in SSBU. Heck, Steve's gameplay and stage are even something surreal to internalize as it actually being part of Ultimate itself. While watching the character showcase last Saturday, it almost felt like I was watching a Minecraft stream rather than Smash (if not for the occasional accompanying fighter for demonstration purposes). As Max stated, Sakurai has managed to widen the generation gap of players in this game even more, and imo, that's a good thing.
Max is pretty much on point. Personally, I've never played a Minecraft game before, but I can totally understand its inclusion as it is one of the most popular video game franchises and it will certainly bring in fans of Minecraft to pick up Smash.

"Max, to nicely put it, calls out people who use “hyper aggression” to target others for not liking or supporting the character they like. This is a mindset that is sadly prevalent not only in the wider community but even here on the site." - I have seen this done many times throughout the internet and social media and at times we all must learn to respect ones opinion whether it is something we agree or disagree with a topic.
The hyper aggression factor is also used for the inverse: ****ting on a character they hate, and those who like said character they hate. This is exactly what happened with Steve.
Last edited: Oct 10, 2020
Though I have no connection to Minecraft, I will always support requested characters; that's how I believe it should be. It's the Plants and Byleths of the world that kill me.

Edit: But honestly, I don't get how people are surprised by Steve at this point... I mean, we've had everyone from Cloud to Banjo to generic enemies to unlimited Fire Emblem characters... if anything, this was a sane choice; this is the Isabelle of the DLC to me. The one we had to get out of the way eventually.
Last edited: Oct 10, 2020
Max always has been and always will be a shining example of what everyone should strive to be in the FGC and Smash Community. A true role model.
Maximillian Dood’s Smash 4 Cloud reaction will always be my favorite reaction video of all time.

Dan said:
Though I have no connection to Minecraft, I will always support requested characters; that's how I believe it should be. It's the Plants and Byleths of the world that kill me.

Edit: But honestly, I don't get how people are surprised by Steve at this point... I mean, we've had everyone from Cloud to Banjo to generic enemies to unlimited Fire Emblem characters... if anything, this was a sane choice; this is the Isabelle of the DLC to me. The one we had to get out of the way eventually.
Click to expand...

To be fair, there is a place for P. Plant- that is, the character based on a unique premise or gameplay idea that I am sure is a lot of fun for the dev team- less stress to please fans, less back and forth involved with the 3rd party characters, being able to throw out crazy ideas. If every character added was only the most requested then it would be pretty predictable and not cover a good scope of Nintendo's history or the history of gaming as a whole (Not that this is their goal, the representation is part of what some fans enjoy about the series- you learn some history or discover new series.)

Some people would have never discovered Earthbound without Smash Bros. We wouldn't have gotten Game & Watch.

P. Plant is an incredibly recognizable character to people in general and some people like the enemy characters more than the general Mario cast (especially since you can use them in a lot of the spin off games.)

It is part of what I don't like about the Pokemon speculation for Smash. You see a lot of people wanting Jigglypuff gone and that "XYZ can't make it in, they aren't cool/badass enough!" When the character design in Pokemon is all about trying to diversify their creatures to have some be cool, derpy, cute, mysterious, etc. So to only have the cool badass ones in Smash may be appealing to a certain group of Pokemon fans (probably the group that overlaps with Smash Bro Speculators) is a disservice to the Pokemon fans as a whole.

I didn't mean to ramble, I just personally like the odd ball picks more than the "obvious" or "inevitable" picks even if no one asked for them.
I'm totally ok with people who are happy with Steve in Smash, but what I'm not okay with is people shutting down anyone who isn't happy with it as "ungrateful" or "old". And vice versa for the whiners who are never happy with any character. For the record, I grew up with Minecraft like all of you. I just don't think he fits well in Smash. And that's okay.
I remember Steve being one of the last characters I ever wanted to see get in, but now I'm just learning to accept it.