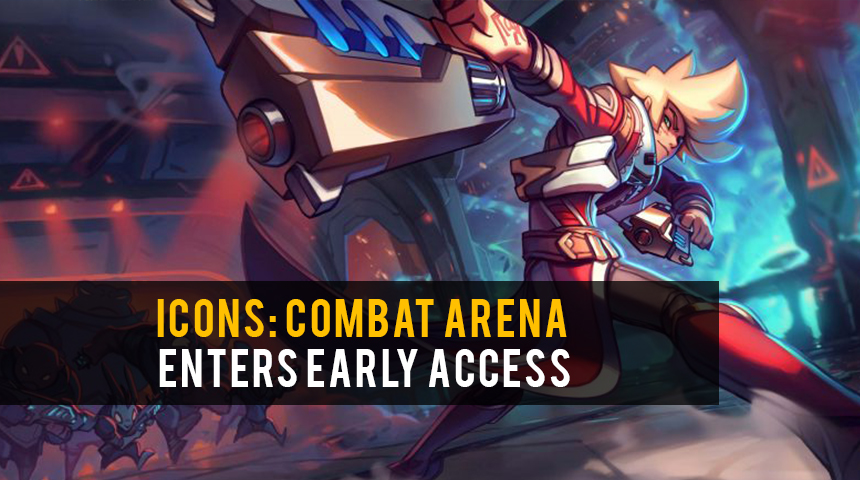 Roughly six months after entering closed beta, Icons: Combat Arena is taking its next step towards release. Wavedash Games' debut title has entered early access on Steam, giving the general public a chance to play the game and provide feedback.

Currently Icons is only available for download in North America, with Wavedash Games citing multiple reasons for the current region lock - the two biggest ones are ensuring the quality of the netcode and compliance with local laws across jurisdictions. The game is expected to launch outside of North America later in 2018.

There never was a C&D or any threat of legal action. Which were the excuses given for why people couldn't work on the mod after the PMDT dropped it. What happened was a bunch of higher ups in the team decided they wanted to make their own game, and didn't want PM as competition, and lied to everyone's faces about that. A number of those same people work now for Wavedash.
Fun as hell. Kinda wish I didn't have to buy the character I wanna play as, in game currency or otherwise, but still.
Shows promise, I think.

I am garbage at the game though ahaha.
ManlySpirit said:
And the fact that they killed PM for this leaves a very poor taste in my mouth overall tbh.
Click to expand...
lol wut?
ManlySpirit said:
That's not entirely true. The same exPM devs that were salty enough the team got disbanded and their **** got deleted, to leak the unfinished build of 4.0, also went ahead a leaked a lot of insider drama.

There never was a C&D or any threat of legal action. Which were the excuses given for why people couldn't work on the mod after the PMDT dropped it. What happened was a bunch of higher ups in the team decided they wanted to make their own game, and didn't want PM as competition, and lied to everyone's faces about that. A number of those same people work now for Wavedash.
Click to expand...
Source? Not saying you're wrong, but I hadn't heard that before. I'd hate for people's names to be dragged through the mud if it isn't true. If true, that's a pretty big bummer, I've been supporting them from the beginning of development.
ManlySpirit said:
That's not entirely true. The same exPM devs that were salty enough the team got disbanded and their **** got deleted, to leak the unfinished build of 4.0, also went ahead a leaked a lot of insider drama.

In case you can't see it. I've attached it as well. That's an exPM dev leaking more of the build on /v/, and giving insider info, and Warchamp coming in and crashing the party. Yes, that's his actual Tripcode, meaning it's most definitely him. You can search for his trip on Google to find more posts by Warchamp with that exact trip in case you want verification.

This is Warchamp7 lying to people, saying that no one from the PMDT works at Wavedash, which is obviously false as we know HE works at Wavedash, alongside StrongBad, and SilentDoom, and Hylian is closely tied to them. Making that 4 people.

Facebook:
>Mewtwo2000/posts/724185831014518
This is a Facebook post by Mewtwo2000, explaining how no legal action taken, that someone simply "suggested they could get in legal trouble" which is also false he's just repeating what people higher up (Warchamp7) told him. He doesn't know, there's just this vague legal trouble they could get into (it's bull****).

And this is a Reddit post by another member of the PMDT saying Nintendo TOOK legal action toward the team and was gonna sew them for a lot of money. (Starting to see the holes in their story). So combine this evidence with what was leaked by a disgruntled member of the team, as well as what was said by Wizztech on 4chan and Reddit when he leaked stuff as well, the truth is simple:

There never was a C&D or any legal action taken toward the PMDT. What happened was, certain higher up members like Warchamp and Strongbad wanted to make their own game that they could make money off of (which they are more than entitled to do), however, instead of leaving the team, and letting others carrying on doing what they were doing. They took over the situation, deleted the near finished build of PM 4.0, and made up some bull**** story about a C&D from Nintendo, in order to prevent PM from competing with their pet project Icons in the future, as they had eSports aspirations with Icons, and had gotten $6 million in funding from investors. Wavedash was formed as a company well before PM was killed off. They actively also took steps to prevent people from working on PM, saying it "could get them in legal trouble if they did." This is confirmed BULL**** now. And if you don't believe me, the first image is again, and insider from the Dev team, anonymously leaking this information on 4chan. And the fact that he leaked this alongside a build of the game that had never seen public, it pretty much verifies it as true. Doubly so since Warchamp himself showed up in the thread to damage control.

Wavedash, and Warchamp and Strongbad can do whatever they like, but the fact remains that they lied to everyone's faces and backstabbed the PMDT, so they could profit of their pet game project, and more than that, got away with it cause everyone believed their lie and came to their defense. To this day, there is still no evidence of a C&D or any legal action taken, and in fact, other fans are still working on their own PM builds like Legacy. And not only that but we have witness testimonies from other insiders contradicting what they "officially" and very vaguely stated. So yeah, that leaves a very sour taste in my mouth.

Here's a recent thread on /v/ discussing it in case you wanna dig into it yourself, some anons elaborate more on it. Toward the bottom: 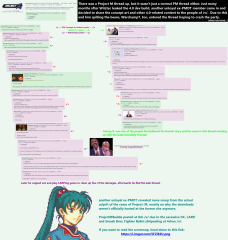