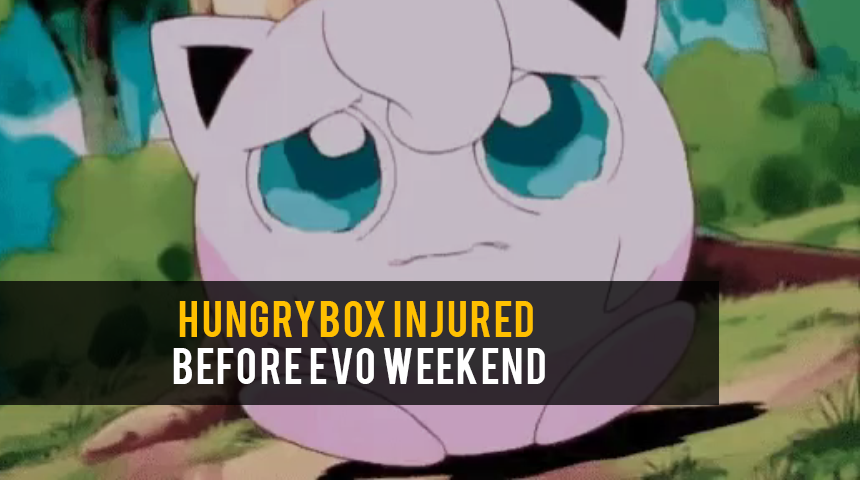 Esteemed Super Smash Bros. Melee player Juan “Hungrybox” DeBiedma took to twitter recently to announce his recent wrist injury. The former Evo champ and current number one player told his followers that after playing Fox and Falco during an Orlando local he started to experience sharp wrist and forearm pain. Injuries are never a good thing, but the timing for this injury could not be worse with Evo weekend just a few days away.

This isn’t the first time Hungrybox has suffered an injury days before an event. In fact, he managed to place 4th at Genesis 4 with a broken finger last year. While there have been a few fans making light of the injury or taunting Hungrybox, most have been supportive. Even those who aren’t fans of the famed Jigglypuff’s playstyle have largely lamented the incident, as most people expected Evo to play a large role in deciding the rankings for the end of the year.

Hungrybox is still expected to enter and compete at Evo, but only time will tell how much of an effect this injury will have on his gameplay.

Check out our guide to watching Evo and make sure you don't miss a second of gameplay this weekend!
Last edited: Aug 3, 2018

Get him the best doctor he can get.
10/10 image choice
The timing couldn't have been worse. Hope he gets better. Wonder who is the favorite to win EVO now.


Nohbl said:
Get him the best doctor he can get.
Click to expand...

Reminds me of the M2K doctor memes.

Nohbl said:
Get him the best doctor he can get.
Click to expand...

Dr. Mario
I guess using fox was too intense for him.
Hope he has a speedy recovery.
While I do not play melee at the pro level, I do wish Hungrybox a fast recovery. Rest those hands, my dude.
Dang speedy recovery to him. Hope he'll be okay Get well soon Hungrybox.
Last edited: Aug 3, 2018

I thought long and hard about this image <3
Unless I don't see any medical substantiation, I have the right to not believe him, I'm really pragmatic.
With this, I'm not saying that he's lying.
Last edited: Aug 3, 2018
I think he'll still do well
Between this, Mkleo getting Chicken Pox and Tweek's flight being canned, there is some strange karma going on this week at EVO.
Aw damn it. I hope it's nothing too severe.....

He might still be able to do well in EVO regardless, but healing up from an injury is more important. Again,. hopefully it just isn't anything too severe. You've got my prayers for a full and fast recovery soon, Hbox.
Good news guys!

I didn’t touch Melee from Tuesday until my round 1 EVO pool to make sure I rested my wrist.

Went 8-0 today with no pain 🙂 hoping it stays that way!

Btw - any people who’d like a picture or autograph, please don’t hesitate to ask. Today is the best time for me to do that! 👍 pic.twitter.com/FXSwCNylNW

DPM15 said:
I do wish Hungrybox a fast recovery.
Click to expand...

He could play Falco and use Phantasm when he's offstage.
This recent article is about Hungrybox and really opens up about his past and stuff here:
https://www.theplayerstribune.com/e...hungrybox-debiedma-everybody-hates-jigglypuff

I actually just learned a lot about him from this, it's really inspiring!

BandanaDeemon said:
His watch is tight maybe that’s why it’s all happening
Click to expand...