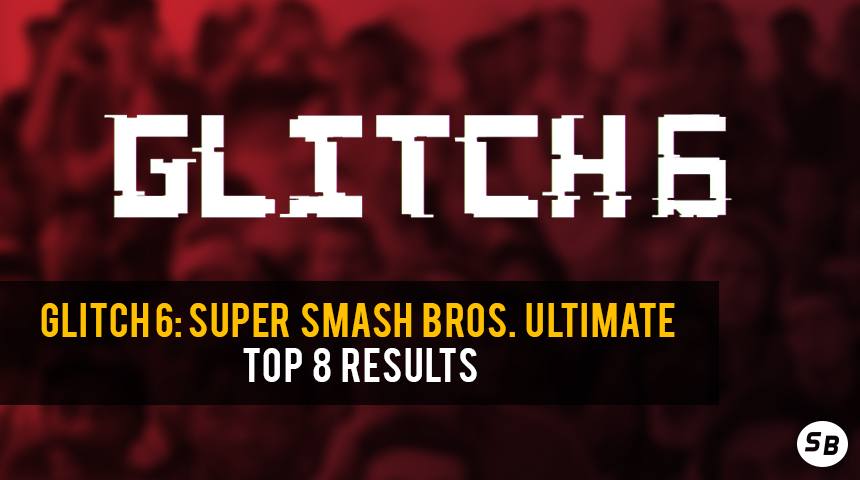 Image Credit: @SB_K0KE​
Glitch, one of the more unique tournament series for Super Smash Bros., returned for its sixth and largest iteration on January 19th. Each tournament, organized by VGBootCamp and Xanadu Games, has a decent focus on side events that are a bit unconventional, such as 3v3 or Morph-Meter. The game of focus for past events has been Super Smash Bros. for Wii U, but Glitch 6 was the first to mainline Super Smash Bros. Ultimate. It’s also the first of the series to break over 255 entrants, and more than double it with 551 sign-ups. Here, we will give a brief overview of the players who finished Top 8, and the journeys they took through Top 128.

The winner of Evolution 2017 and ranked 6th on the Panda Global Rankings Top 100, Salem was among the strongest players for Smash Wii U. He was among the most fearful opponents to meet in bracket, and his results in Ultimate are looking strong in the early days. Due to some movement downward in the meta, Salem has dropped Bayonetta in favor of Link, who he has used to devastating effect. Crazy bomb setups, controlling projectile play, and the awareness to put it all together have made Salem just as deadly as before, even with the character change. That said, the young meta of Ultimate is still a bit of a challenge, and Salem was knocked out at seventh. His Link still has plenty of room to grow, and this will likely be a higher placing as time moves ahead.

Ranked 26th on the Panda Global Rankings Top 100 and the top player of MD/VA, WaDi was a consistent Top 8 threat throughout Smash Wii U’s lifecycle. His Mewtwo was a machine of pressure, and consistently worked to make opponents uncomfortable regardless of where they were. For Ultimate, he has shifted over to his Wii U secondary R.O.B., who WaDi believes is now a better fit for him than Mewtwo. At the time of writing, WaDi is a free agent. If he continues to keep himself a major threat, then that may change over the next year.

One of the strongest players from the MD/VA region, ZD was a solid Fox main that managed to put himself on the cusp of breaking out as a top player in Smash Wii U. His performance at Glitch may be the beginning of a new chapter, and he’s looking to push higher than before. Though his performance with Fox was impressive in Smash Wii U, it looks like Fox in Ultimate is just what the doctor ordered. Managing to beat Salem and Ally is no feat to sneeze at. At this point, he will a player to keep an eye on, and we will see if he manages to take this new momentum even further.

Formerly known as “Mistake”, tamim was the strongest Smash Wii U player to come out of Ontario, and was ranked 25th on the Panda Global Rankings Top 100. A strong Bayonetta main, tamim was a regular Top 8 finisher. Though Bayonetta isn’t favored as much in the Ultimate meta, tamim has stuck with her. While some may say that players like tamim were carried by strong characters like Bayonetta, the results show that he's been doing the carrying instead. With this in mind, tamim will likely be one of the stronger players to deal with for Ultimate, regardless of what character he chooses in the long run.

The strongest player towards the end of Smash Wii U’s lifecycle and ranked 3rd on the Panda Global Rankings Top 100, MKLeo was a true powerhouse of the game. As the strongest player to come from Mexico, it’s no surprise that MKLeo is continuing his dominating playstyle in Ultimate. While he was known for his Cloud and Marth, he has since moved to Ike, whose hard-hitting and aggressive attacks seem a natural fit. Even in these early days, MKLeo is looking like a true terror for anybody he meets in bracket. Though, it seems that some more work needs to be done to solidify Ike, as shown by MKLeo gaining fourth. He is certainly still a Top 5 player, and a strong runner for the best of the game.

Light is one of the newer faces among the top competitive players for Smash Bros., but his growth has been a tremendous one. Towards the end of Smash Wii U’s lifecycle, he started pushing himself into the limelight more and more, and even earned 43rd on the Panda Global Rankings Top 100. With Ultimate, that momentum isn’t slowing down at all, and his results at Glitch are a good indicator of how far he wants to go. Not just anybody can beat players on the level of Salem and MKLeo. Light is sticking with Fox for Ultimate, and the decision paid off here. At the time of writing, Light is unsponsored, though that will likely change soon.

One of the stronger players of Super Smash Bros. Brawl and ranked 2nd on the Panda Global Rankings Top 100, Nairo has always been a massive presence in bracket. He was the strongest Zero Suit Samus main in Smash Wii U, and has always been in the running for taking first place at every tournament he has entered. Now, he has switched over to Lucina and Palutena, and put each to devastating effect. His calculated playstyle continues to hold up for Ultimate, and seeing Nairo within the Top 3 of any tournament will be a regular occurrence throughout the game’s lifecycle. With enough work, we may even see him take the coveted spot as the top player of Ultimate. Only time will tell.

Tweek is one of those players that just seems to keep rising. Since 2015, he has spent year after year pushing towards becoming a Top 3 player. He managed to make some incredible victories, and even got ranked 7th on the Panda Global Rankings Top 100. Now, with Ultimate, Tweek is looking like the player to beat. While he is known for Bayonetta and Cloud, Tweek has shifted over to Wario and Young Link. However he came about that switch, it is working wonders for him. Nobody managed to take a set off of him throughout the entire bracket. With Glitch 6 under his belt, Tweek will be looking to take Genesis 6 next, and there is a good chance that he will. While Tweek is unsponsored at the time of writing, that will likely not be within a month.

Everyone in this tourney went off. The sets were awesome and the commentary (especially in top 8) was great.

Makes me wonder what Genesis has to offer.
Congrats to Tweek!!! What a legend! I think he will win EVO2019.
Is there a video posted anywhere of the tournament?
Like if you're still Team Salem/Link even after all "the years of research" controversy lol~

Salem placing 3rd at SC United, and then tying for 7th place here... As a looooong time Link player (been maining him since 64 no joke

) nothing is making me happier right now than Salem's placings with Link! People keep saying Young Link is the best Link but no dedicated Young Link only main has made it as far Salem using only just Link. (well almost) I mean, I did see tweek pull out Young Link of course, but we all know who his main big dude is~

I'm just glad Salem is advancing the Link meta so far, and I can only hope Izaw starts attending high profile tourneys soon as well. And I do hope none of this is overlooked as the back room begins cooking up the 1st official tier list for this game- Link is definitely better than young or toon link imo!

MattySlice said:
Is there a video posted anywhere of the tournament?
Click to expand...

Yes. Please check out VGBootCamp channel on YouYube for all the top ranking matches in full from Glitch 6:
https://www.youtube.com/user/VideoGameBootCamp/videos

And their secondary channel, VGBootCamp Ultimate if you just want some highlight reels:
https://www.youtube.com/channel/UCbJQm5GSuNX7dDGM5FYDwPw/videos

MattySlice said:
Is there a video posted anywhere of the tournament?
Click to expand...

The_Bookworm said:
Everyone in this tourney went off. The sets were awesome and the commentary (especially in top 8) was great.

Makes me wonder what Genesis has to offer.
Click to expand...

except coney
Let's go Mistake! That was one heck of a run to top 6 with Bayonetta
5/8 of these are young bloods too, WaDi (albeit only in WiFi), Salem, and Nairo are the only players that played in the brawl days in the top 8, though Leo did too it’s just kinda technical, he was winning tournaments at 8 years old.

Slowly these new faces are coming in like Tweek, the aforementioned Leo, Light, etc. are coming in and becoming the faces of the scene, can’t wait to see what faces come in and leave their mark in Ultimate
You must log in or register to reply here.
Share:
Facebook Twitter Reddit WhatsApp Email Link
Top Bottom