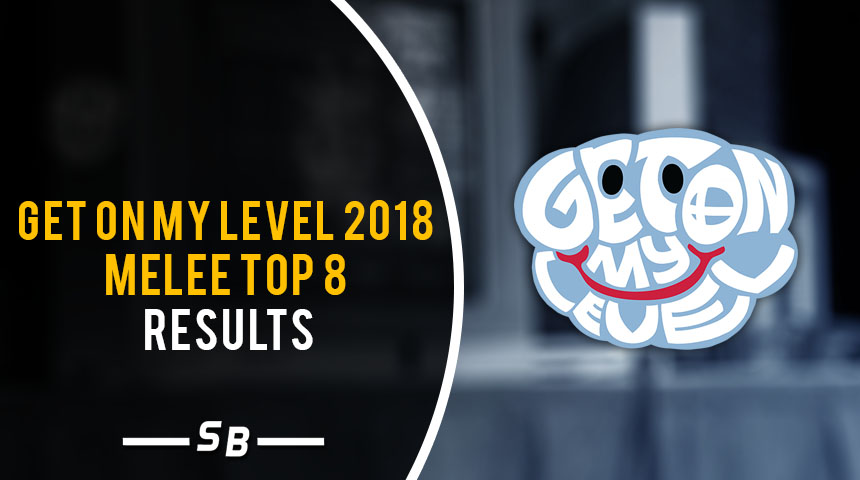 Get On My Level(GOML) has been the premier Canadian national tournament since 2014, and has managed to produce explosive sets throughout its run. GOML 2018 kept that going strong, with a fantastic bracket for Super Smash Bros. Melee. Top 64 proved to be a tough challenge for many, and there were interesting upsets littered throughout bracket. Here, we will take a look at the Top 8 finishers and their journeys through Top 64.


Coming out on top was Team Liquid’s Juan “Hungrybox” DeBiedma. Hungrybox continues to be the dominant force of Melee, and his victory at GOML is another notch to add to his belt. His Jigglypuff is continually evolving, and he has yet to show signs of slowing down in the months leading up to Evo 2018. In Top 64, he made an impressive Upper Bracket run through Slox(3-0), Shroomed(3-0), Crush(3-2), and Axe(3-0) to qualify for Winners Finals. There, he met his first stumbling block, and fell to Plup(1-3). In Losers Finals, he faced Axe once more, and defended his placement in bracket with a 3-0 victory.(3-0). Grand Finals was close to begin, but Hungrybox was able to pull himself forward through two grueling sets to defeat Plup(3-2, 3-1). In the end, Hungrybox proved to be unstoppable again, and keeps himself at the top of Melee. It’s now a question of how long this dominance will last, and whether tides will shift by the time of Evo.


Coming out at second was Red Bull and Panda Global’s Justin “Plup” McGrath. Plup has been an interesting dark horse among the top players of Melee. He has broken through his title of gatekeeper a while ago, and his chances of placing first have only grown since. In Top 64, he defeated Mahie(3-0), Duck(3-1), Lucky(3-2), and Mew2King(3-1) to qualify for Winners Finals. He managed a convincing win against Hungrybox(3-1) to make his way to Grand Finals on the Winners side. Yet, Hungrybox came back with a vengeance. Though he gave him a good fight, Plup eventually fell to the Jigglypuff main(2-3, 1-3). Plup has been breaking barriers for a while now, but has yet to push himself to the top. Given time, he may reach those heights, but it seems he’s got some more barriers to break in the meantime.


Coming out at third was Tempo Storm’s Jeffrey “Axe” Williamson. Axe has been a stable part of the Top 10 since 2014, and has been on the the hunt to push himself higher. In Top 64, he defeated Trulliam(3-0), n0ne(3-0), and aMSa(3-2) to make it to Winners Semi-Finals. He faced, and was defeated, by Hungrybox(0-3), placing him in Losers Quarter-Finals. Picking himself up, he made a small run through Zain(3-1) and Mew2King(3-2) to earn a place in Losers Finals. There, he met Hungrybox once again, and his journey was put to an end(0-3). An impressive third place finish from Axe, given the number of tough matchups he had to face. If his improvement continues, he may well find himself placing Top 3 again soon at the next major.


Coming out at fourth was Most Valuable Gaming and Echo Fox’s Jason “Mew2King” Zimmerman. With Mew2King’s incredible win at Smash Summit 6, there was a renewed fervor around him. Viewers wanted to know if he could pull it off again, and GOML seems like a good chance for him to shine again. In Upper Bracket, he had a good run, taking out Nightmare(3-0), Westballz(3-0), and Moky(3-1). Then, he faced Plup in Winners Semi-Finals, where he was defeated(1-3). In Losers Quarter-Finals, he defeated aMSa quite handily(3-0) to qualify for Losers Semi-Finals. Though he put up a strong fight, Axe eventually came out on top(2-3), and added another win to his current streak on Mew2King. Though it might seem anti-climatic since Summit 6, Mew2King is still pushing himself forward. He made some interesting choices in bracket, and some paid off in their own way. What this means for his future gameplan is yet to be seen.


Coming out as one of the fifth place finishers was VGBootCamp’s Masaya “aMSa” Chikamoto. aMSa has been a dominating force for a while now, and GOML was another North American tournament to put in his stock of Top 8 finishes. In Upper Bracket, he ran through Legend(3-0) and La Luna(3-0) to make it to Winners Quarter-Finals, where he met Axe. After a close set, aMSa was sent to Lower Bracket(2-3). From there, he pushed forward, and defeated Duck(3-0) and Swedish Delight(3-1). In Losers Quarters, he had to face off against one of his regular obstacles, Mew2King, and was eliminated from the tournament(0-3). If any year has been aMSa’s year to shine, it’s been 2018. His increased attendance and persistent growth has been a threat to everybody he faces, and he keeps pushing himself higher. With this trend continuing, he may just break into the Top 10 of SSBMRank soon enough.


Coming out as the other fifth place finisher was Panda Global’s “Zain” Naghmi. With his drive towards the top, Zain is continuing to prove that he is a contender to take seriously. At GOML 2018, he made the biggest run through bracket, and proved that you can’t count him out so quickly. The biggest surprise was his loss in Winners Semi-Finals of his pool to Hyprid(1-2), forcing him down to Losers Bracket for the entirety of Top 64. Yet, that was only the beginning of his journey. From there, he ran through Flood(2-0), Mahie(3-0), Tranimal(3-0), n0ne(3-0), Shroomed(3-2), and Moky(3-1) to qualify for Top 8. He didn’t stop there, and earned an impressive victory over SFAT(3-1). In Losers Quarter-Finals, he met his biggest hurdle in Axe and was eliminated from the tournament(1-3). While his placement might not be as surprising these days, the journey he took was nothing short of astounding. A full seven victories through Lower Bracket to earn fifth place. GOML 2018 may not have been Zain’s tournament to win, but it was certainly a message to anybody who doubts his skill.


Coming out as one of the seventh place finishers was Counter Logic Gaming’s Zachary “SFAT” Cordoni. SFAT has been one of the more hardworking members of the Melee community, and has kept his eyes on the prize for years now. While he’s had his moments of stumbling, SFAT continues to push through with everything he’s got. In Upper Bracket, he defeated Rishi(3-0), but was put to a halt by Crush(1-3), and sent to Lower Bracket. Yet, that did not stop him, and he made an impressive run through Ryan Ford(3-1), La Luna(3-0), and Lucky(3-1) to qualify for Top 8. There, he unfortunately met Zain, who was on one of his hottest streaks of all time, and his journey came to an end(1-3). Whenever SFAT is in a bracket, it’s a safe bet that he will push himself into the Top 8, regardless of obstacles. Over 2018, we will have to see if he goes even further beyond.


Coming out as the other seventh place finisher was OG’s James “Swedish Delight” Liu. While Swedish Delight has been a regular threat to any tournament goer, factors are looking bright for his future. His recent acquisition by OG Esports may be a great catalyst for his Melee future, and GOML was a great opportunity to show his commitment towards improvement. Unfortunate for him, his first set in Upper Bracket resulted in a loss, thanks to La Luna(1-3). From there, he had quite a distance to run, and run he did. Lower Bracket saw him go through Lacroix(3-0), Legend(3-0), Amsah(3-0), KJH(3-2), and Crush(3-2) to qualify for Top 8, the second largest Lower Bracket run of GOML. Unfortunate for him, he met aMSa in Losers Eighths, and his run came to an end(1-3). Swedish Delight may pass under the radar from time to time, but he is not to be dismissed. With his new partnership with OG, he will likely push further than before. For 2018, Swedish Delight may be a regular Top 8 finisher, but time will tell.


GOML 2018 was another fantastic iteration of the series, and the level of Melee on display was a sight to behold. There was the potential for Moky to qualify for Top 8, but he was ultimately defeated by some of the bigger names at the tournament. While we looked over the Top 8 here, many of the sets in Top 64 were interesting in their own right. By the end of 2018, the rising talent of Melee may change the game once again, and fans around the world are watching in anticipation.
Last edited: May 22, 2018

Huzzah for HBox! Did anyone see him on the Florida Fox news a couple months ago?
Rip Plup
The Pink Terror lives on.
Last edited: May 24, 2018
You must log in or register to reply here.
Share:
Facebook Twitter Reddit WhatsApp Email Link
Top Bottom