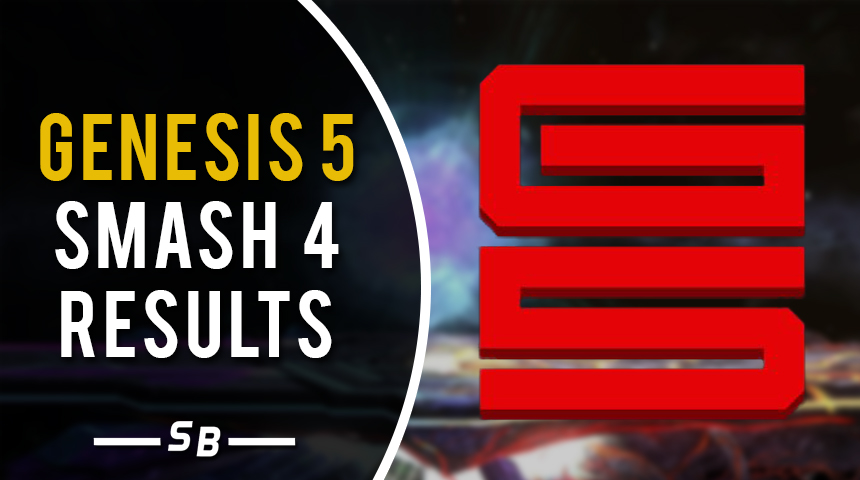 Super Smash Bros. for Wii U returned to Genesis 5 for its third run at the prestigious tournament series. With the recent news about Zero’s retirement, this tournament was the perfect opportunity for the community to see just where the game’s future resided. The sets that played out there could set the tone for the future year in Smash 4, and possibly for far longer. Here, we look over the Top 8 finalists and the journeys they took through Top 32.

Coming out in first place was Echo Fox’s Leonardo “MKLeo” Perez. One of the games biggest contenders for top ranking, MKLeo was a dominating force at Genesis 5. His run through bracket was unhampered by any losses, and even the toughest games seemed to be in his control. He held victories over players Lima, Zenyou, Dabuz, Salem, and Mistake. With Zero out of the picture for the competitive future, MKLeo is poised to lay claim to the new dominating champion of Smash 4.

Earning second place was Even Matchup Gaming’s Tamim “Mistake” Omary. After a tough run at Pax South 2018, Mistake wasn’t a favored contender for Genesis. Yet, his run through Lower Bracket was the longest in the tournament, and his performance was a showstopper. After a loss to Maister in Round 2 pools, Mistake made a straight line towards Grand Finals. The run included players ANTi, Konga, Javi, WaDi, K9sbruce, falln, Dabuz, Nairo, and Salem. During Top 8, he almost seemed to be cruising through, taunting all the way. However, his run met an end when he meet MKLeo in Grand Finals. One 3-1 set later, and Mistake had fallen. A huge upset performance by a rising star of Smash 4.

Earning third place was Most Valuable Gaming’s Saleem “Salem” Young. Another contender for the new top vacancy, Salem has been a strong competitor for a while. Genesis looked to be a strong chance for him to stake his claim, and Salem brought everything he had to the tournament. He managed to make a clean run through Upper Bracket, beating players Maister, Ally, and MVD. From there, he was defeated by MKLeo in Winner’s Finals, and then eliminated by Mistake in Loser’s Finals. While Mistake was a bit of a wild card in play, there is no doubt that this is a strong start for Salem in 2018.

Earning fourth place was NRG eSports’ Nairoby “Nairo” Quezada. One of the more consistent players of Smash 4, Nairo had a tough bracket to run through at Genesis. An upset by Legit in Round 2 pools put Nairo into an early Lower Bracket run. From there, he made one of the longer runs of the tournament. He acquired victories over players SuperGirlKels, Brood, Tamushika, Maister, Zenyou, ESAM, and MVD to reach Loser’s Semi-Finals. There, his run was put to an end by Mistake. This was another player who was cut short of expectations by a wild card. Yet, Nairo has moved beyond such bumps in the past, and continued to show why he is a true competitive threat.

Earning fifth place was Samuel “Dabuz” Buzby. Dabuz has been one of the top five players since the beginning of Smash 4’s competitive life, and Genesis 5 was his chance to prove that he still holds that threat. His journey through Top 32 was straightforward, taking sets off of players Chang and ESAM. In Top 8, he met one of his demons in MKLeo, and was dropped to Lower Bracket. There, he became another player to fall to the wild card run of Mistake. A strong placement for Dabuz, but this will likely not be the end of his journey forward.

Earning fifth place was Panda Global’s Jestise “MVD” Negron. MVD has always been a Top 32 threat for most tournaments, and Genesis was his answer to just how much he is capable of. One of the strong Diddy players of Smash 4, he has been trying to push himself forward for a long time. At Genesis, he pushed himself further up. In Top 32, he took wins over players Legit and K9sbruce to make Top 8. There, he faced off against one of the scariest players to meet in bracket, Salem. After a loss to him, MVD was then forced to face another demon in Nairo, and met his tournament end. A great run from a player who is looking to move up the ranks in 2018. If Genesis is any indicator, he might be able to do it.

Earning seventh place was Chris “falln” Rugg. falln has been a Top 32 threat for a long time, and Genesis may be the breakout he needed. He had a tough run through bracket at Genesis, after his first Top 32 match was a loss to Zenyou. From there, he turned up the heat. He took sets off of players Raito, Lima, and even Ally to qualify for Top 8. There, he met Mistake in Loser’s Quarters and his run came to an end. falln has had strong runs in the past, and Genesis is among one of his best. As it stands now, he is unsponsored. Though, he may be getting offers soon, and Genesis may be far from his last Top 8 showing.

Earning seventh place was Panda Global’s Eric “ESAM” Lew. ESAM, one of the more active Smash 4 players, has floated outside of top 10 status since PGR introduced its rankings. With Genesis 5, he may be pushing forward towards that in 2018. His run through Top 32 had a set win over Javi, before being pushed to Lower Bracket by Dabuz. From there, he made it into Top 8 by making an upset over Mr. R to meet Nairo in Loser’s Quarters, where his run was ended. Genesis was among one of ESAM’s better performances. If this is continued, ESAM might just prove himself a regular Top 8 threat.

Genesis 5 was a huge tournament for the Smash 4 community, and the players who attended did not disappoint. With Zero retired, the results at Genesis may be a strong look forward at how Smash 4 in 2018 will become. Lower ranked players may be getting a second wind towards pushing upwards, and those at the top will be vying for total domination. Yet, in the end, Genesis 5 was still one of the great Smash 4 tournaments to date.