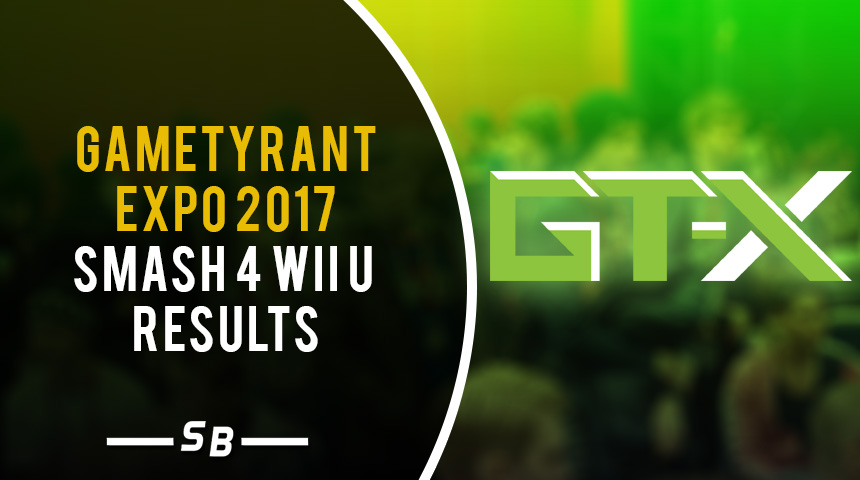 Super Smash Bros. for Wii U had a very strong showing at GameTyrant Expo 2017. A bracket of twists, turns, and surprises led to one of the most nail biting Grand Finals the game has ever seen. Here, we will take a look at the journeys taken by the top 8 throughout GTX.

Echo Fox’s Leonardo “MKLeo” Perez ended the tournament in first. His run through winners included victories over players komorikiri, Salem, and Mr. R. His run hit a snag in Winner’s Finals, where he met the dark horse of GTX, Elegant. Sent to Loser’s Finals in a 1-3 set, he made a quick turnaround by defeating ZeRo 3-1. In Grand Finals, he faced Elegant once again. After ten close games, he was able to claim his place at the top.

Beefy Smash Doods’ Matt “Elegant” Fitzpatrick earned second place. His run through bracket included clean wins over players such as Ally, Nakat, Samsora and ANTi. His final challenge was MKLeo, which he overcame to earn a place in Grand Finals. With how close he was to taking everything, we will likely see an increase to his ranking for the next PGR.

Team SoloMid’s Gonzalo “ZeRo” Barrios came out at third. In one of the biggest upsets of GTX, he lost Winner’s Finals of his pool to Darkshad. After being sent to the Loser’s bracket, his run included wins over players CaptainZack, Tweek, Raito, Salem, revenge against Darkshad, ANTi, and Larry Lurr. His run came to an end when he met MKLeo in Loser’s Finals. An amazing run from the top ranked player.

Misfits’ Larry “Larry Lurr” Holland had the other great Loser’s run, earning himself fourth. Nakat pushed him down to the Loser’s bracket in Winner’s Finals of their pool. From there, he ran through BestNess, Ally, komorikiri, Zinoto, Charliedaking, Samsora, and Mr. R. His run was put to a halt by ZeRo, who was on a tear of his own. An impressive run that could only be stopped by another determined Loser’s run.

Immortals’ Jason “ANTi” Bates finished as one of the fifth place participants. His run through Winner’s bracket included victories over players Fatality, Tweek, and Charliedaking. His run was halted with back to back losses by Elegant and ZeRo. This marks his second Top 8 placing at an S-tier event for the season.

Beastcoast’s Ramin “Mr. R” Delshad finished as the other fifth place participant. His run through Winner’s included victories over players Tyrant, Marss, and Darkshad. His run was halted with back to back losses against MKLeo and Elegant. Another strong showing for Mr. R’s season record.

Events2Compete’s Orion “Darkshad” Wolf finished as one of the seventh place participants. His run through Winner’s had victories over players Locus, ZeRo, and MVD, before falling to Loser’s bracket by Mr. R. There he had a stunning victory over Nairo to make Top 8. His tournament journey was put to an end when he met ZeRo again in Loser’s Eighths. Darkshad continues to show his drive at improvement, and we have not seen the last of him.

Jamaal “Samsora” Morris Jr. Finished as the other seventh place participant. His run through Winner’s had victories over players Abadango and Nairo, before being knocked to Loser’s by Elegant. There, he triumphed over Dabuz to make Top 8. There, he was stopped by Larry Lurr in Loser’s Eighths. Another player with drive and ambition, Samsora was the only player not sponsored in some way for Top 8. With his tough run through the GTX bracket, we may see that change soon.

For its first year, GameTyrant Expo delivered a Wii U bracket that was among the toughest ever seen. For those who made Top 8, it was a grueling run through some of the best. With GTX over, the question many players now have is “Will GTX make a return?" Only time can tell.