GameCube Controller on Switch: How will it happen? 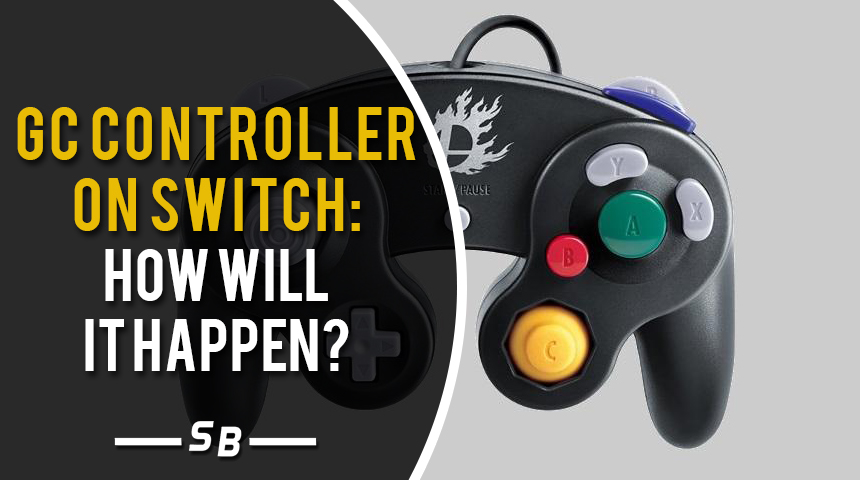 So, the Switch dock only has three USB slot, one of them is very hard to reach, and they’re not available in portable mode. What will be done this time around? The port is secured pretty far in the back, too, which isn't the most accessible slot. Only certain adapters work after updates, too, and it's confusing to find out which one works.

This definitely leaves 8 player smash in question, and still leaves 4 player smash to be questionable for the Switch. The biggest concern is, if we get GameCube controller support, how will it be managed this time? Will an official USB hub be supported? A bigger Ninetndo Switch dock?

We came up with a few ways, with combinations being possible.

Nintendo knows the demand of both of these, and this is kind-of the "No-brainer" solution.

An official USB hub is more an "If there's 8 player" case. Nintendo's sold products to help before, such as the Ethernet hub, so this is possible to see.

3. A Wireless GameCube Controller for JoyCons

The Wireless GameCube Controller with Joycons wouldn't solve every problem, especially since this would be a wireless controller, but it does potentially solve the problem of being portable.

It's possible, but doubtful due to the amount of demand. Figuring that there's been some back and forth between updates on a USB port

5. Nothing happens, but GC compatibility is allowed

This is also doubtful, but this is what happened during Super Smash Bros. Brawl. GameCube controllers were still allowed to be used with the game, but nothing happened beyond that.

Many questions arise, but it will be exciting to see. Nintendo knows how popular GameCube controllers are for Smash, so there's little doubt they'll try to cash in on it.

Author's Note: Personally hoping to see 8 player return and make use of the two GameCube hubs I have. What are your thoughts? Let us know in the comments below!
Last edited: May 10, 2018

wasn't there a switch firmware patch that enabled compatibility with the GCN controller/adapter not too long ago?

LovinMitts said:
wasn't there a switch firmware patch that enabled compatibility with the GCN controller/adapter not too long ago?
Click to expand...

That's what I thought too. I remember seeing people play games like BotW and MK8DX with the GCN controller.

The only thing that doesn't work is the analog triggers, they function as digital triggers.
We'll construct a new gamecube controller using Nintendo Labo

SiO2 said:
That's what I thought too. I remember seeing people play games like BotW and MK8DX with the GCN controller.

The only thing that doesn't work is the analog triggers, they function as digital triggers.
Click to expand...

To my knowledge, that was actually an accident caused by the implementation of support for another controller that used a similar driver. The same thing happened earlier in the Switch's lifespan with the Mayflash adapter in PC mode, since they just used a generic DirectInput driver when implementing support for Hori's Pokken controllers.
Trying to find a GCN controller adapter at retail stores would have to be nearly impossible by now, considering that it was only really meant to be used for the Wii U.
I think they’re going to add an adapter but to be more adapted to Switch, such as a longer cable or something. I really doubt they would give up on the GC controller, it’s pretty much the norm for Smash, at least in competitive play.

Exactly who I was referencing!!! XD
making use of USB hubs and reprinting the GCN controller would be the more cost effective method of actually getting stuff done, although if you really wanted to do 8-player format, you'd be better off just specifically doing an 8 port hub. it looks tidier, and you could have ports 5-6-7-8 being players 1-2-3-4 in four player format (and being rendered useless if said players/ports were occupied already). Doing two separate adapters for each setup instead just looks like a mess, and would probably cause some confusion on what was what should 8-player be more reliably implemented.

knowing Nintendo, though, if they are going to satisfy the demand in some degree, it's likely going to be a minimalist one, paving the way for third parties to develop their own peripherals as alternate solutions... should Nintendo decide to jack up the prices again.

might be beneficial in keeping an eye on third parties, anyways... for Smash 4, I currently use a HORI "Fight Pad" (according to the box), which in essence is "a Classic Controller Pro attachment for the Wii remote... shaped like a GCN controller". it does come with a turbo button, but I personally don't find it worthwhile outside of very minor conveniences since you're more likely to make a mistake if you use it for "mashing"
Last edited: May 11, 2018
The Wii U GameCube ports work on the Switch, so that's an option. However, there's no home button or snapshot button so those will probably have to be added somehow.

USB versions of the controller would be awesome too, heck, I'll take a wireless GameCube controller as well!
Last edited: May 11, 2018
Yeah the adapter works, both the official one and mayflash!
Been using it to play Mario Kart Deluxe, dontd think that nintendo will release an official USB hub, but the option will be there...
I hope they make the adapter once again and give it proper support on the switch...
They should upgrade the GCN Controller for modern use.
I'd love GameCube joycons for handheld. Maybe give it more buttons so it can work with other games too.
A new Nintendo Switch Smash bros edition allows to play with GC controller and 8 players...
You must log in or register to reply here.
Share:
Facebook Twitter Reddit WhatsApp Email Link
Top Bottom