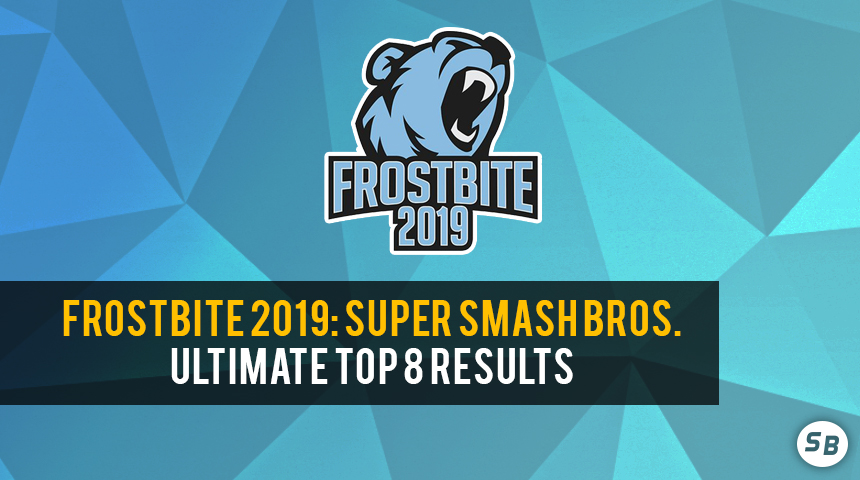 Image Credit: Koke​
Frostbite 2019, the latest of the now three year old series, was a great showcase of where the current meta of Super Smash Bros. Ultimate is headed. While Genesis was the first major to feature Ultimate, Frostbite is a whole patch removed, and players are more intimate with the game than before. In other words, Genesis was a good chance for high-level play to be explored, while Frostbite was a good look at how high-level play has adapted and will adapt. Beyond that, its high quality production was a delight to behold, and its Top 8 was a rollercoaster of close calls, flashy finishes and brilliant strategy. Here, we will look over the Top 8 finalists, and the journeys they took through Top 48.

MVD has been pushing along since the Super Smash Bros. Brawl days, and that experience has been paying off in Ultimate. MVD was a Top 8 threat in Super Smash Bros. for Wii U and earned a final ranking of 31 in the PGR100. Now, he has Snake, his old main, to create a new explosive drive. With Don't Park on the Grass under his belt, and a 7th at Frostbite, MVD’s performance is shaping up to be a bigger threat to any player in bracket.

Nairo is in an interesting position for Ultimate. While he was ranked 2nd in the PGR100 and was one of the most consistent players of Smash Wii U, Nairo has a more erratic performance these days. This is likely due to the shift away from Zero Suit Samus and adjusting to his new mains, Palutena and Lucina. His performance with both are certainly world class, but his play is still in the process of fine tuning. As his familiarity with them grows and match ups are more fleshed out, Nairo will likely pole vault forward in the meta. Others are adjusting as well, however, and his competition will be tough.

In his third Top 8 appearance for 2019, Light is the Fox player to beat in Ultimate. Light has some demons to beat among the top players, but his consistent placings are a good sign that he is poised to fight them head on. With the new sponsorship under Rouge and the regular travel to big tournaments, it might not take him long to make a huge upset.

Cosmos is a man banking on making Inkling work and has been the premier player to show the character's potential. Among the majority of tier lists made for Ultimate, Inkling is considered top tier. While there are many who play Inkling, either as a main or secondary, Cosmos is at the head of the pack. With a high pressure neutral and strong punish game, Cosmos is bringing out everything he can from the Smash newcomer. He's still got quite a bit of work to go for the character, but a few months of grinding might show just what he, and Inkling, can do.

Shuton was among the top rated players in Japan for Smash Wii U and was a bracket threat in any international tournaments he attended. In Ultimate, with the buffs given to Olimar, he is looking like an even bigger threat than before. Frostbite was his second appearance in the States this year, and both have been high finishes with tough competition. His 4th place finish had him run through big names like Nairo and Cosmos. Come the end of the year, Shuton could be a regular Top 8 finisher, even at an event like EVO. Regardless, we look forward to his next visit, and his next major.

After a 9th place finish at Genesis 6, Myran was quickly picked up by Armada. If they wanted to know how that pick was going to work out, then 3rd at Frostbite probably sealed the deal for a while. Myran spent most of Smash Wii U’s lifecycle pushing towards regular rankings, but only earned a spot in the PGR v3 at 39th. Now, Ultimate has seemed to be the paradigm shift he needed, as he managed to beat out some of the bigger names, including Larry Lurr, in Pools. With his performance at Genesis and Frostbite combined, we might be looking at a new regular Top 10 player for Ultimate.

MkLeo continues to be a Smash powerhouse. His Ike is a juggernaut that just won’t relent, and it continues to prove valuable to him. MkLeo has been trying out potential new mains for Ultimate, however, and his Lucina and Wolf saw some play at Frostbite. With his 1st place finish at Genesis 6 and Heart of Battle, MkLeo looked like he would claim the number 1 slot on the rankings again. Yet, he and Tweek had never actually met in bracket before Frostbite. So, the question remained which of them would come out on top if they met. Unfortunately for MkLeo, this was not his tourney to win. He is still in the process of determining how he wants to approach Ultimate and has yet to really settle on his character roster. Given time, his and Tweek’s next encounter could just go his way.

If there was ever a tournament for Tweek to lay claim to the throne of best Ultimate player, Frostbite was it. Some of the world’s best talent appeared, and he had the chance to finally show how he would perform against MkLeo. Over the course of the bracket, Tweek didn’t drop a set to anyone and even managed a 3-0 victory over MkLeo in Grand Finals. There’s not much to say about Tweek that the results don’t say on their own. Though, the race is now on. With Tweek securing himself as the top Ultimate player, he has become the man to beat, and competitors everywhere will gun for him. Given Tweek’s record so far, he’s got a good chance to hold the title for a while, and his sets will be ones to keep an eye on for anybody who wants to know what makes a champion.

Hey, thank you for making major tourney recaps for people like me who aren't always in the loop. It's appreciated.
Thanks, I am a student and reading this helps me stay updated when i dont have time.
You must log in or register to reply here.
Share:
Facebook Twitter Reddit WhatsApp Email Link
Top Bottom