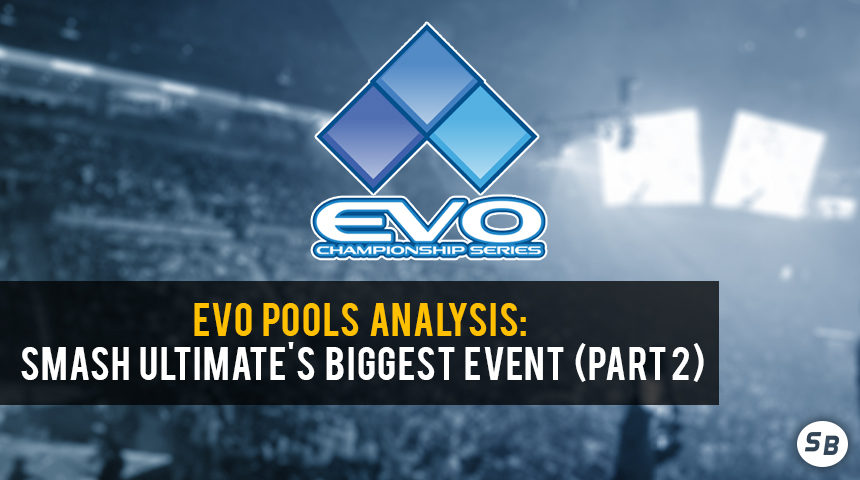 Welcome to part 2 of my EVO pools analysis! Yesterday I covered some of the most anticipated seeded sets of the event. Today, I’ll cover the rest, including a death pool comparable to yesterday’s Pool K504.

As I stated yesterday, there are many good players who will go unmentioned for the sake of brevity. Any of them could make a big upset that tears apart the projected brackets, though, and given past EVO events, it’s certain that somebody I didn’t mention will make a major upset in bracket.

This is, after all, the biggest Smash event of all time.


While not as much of a death pool as K504, upsets that occured at Smash Factor 8 will make this pretty ugly.. Enrique “Maister” Solis is set to lose to Ishiguro “Raito” Tetsuya, and both are set to lose to James “VoiD” Makekau-Tyson.

If you watched Smash Factor 8, you might assume Maister is the favorite. His recent wins on Yuta “Abadango” Kawamura and William “Glutonny” Belaid demonstrate that he has very high potential despite having a lower seed.

On the other side of the bracket, we have Shuto “Shuton” Moriya set to clean up his side of the bracket. While that’s the likely outcome, he’s less invincible than Samuel “Dabuz” Buzby, and has a few potentially deadly opponents in bracket.

Austin “Awestin” Cornelius is one, though his recent underperformance at Low Tier City 7 may make people skeptical. Troy “Puppeh” Wells is another, though it’s hard to say how he’ll perform since CEO 2019 was his first significant outing, and he will be fighting another young prodigy - Edgar “Sparg0” Valdez - in order to get the chance to fight Shuton.

While other regional talent exists in this bracket that could break these narratives, the next person I’d like to point out is Jason “Yei” Valverde, who recently made a deep bracket run to place 7th at Smash Factor 8. He is Costa Rica’s undisputed #1 player and has not lost a tourney in his country for years.

While his win on Eric “Mr E” Weber was very impressive, early wins on Puppeh and Sparg0 could put him on a top 50 shortlist for the end of the year.

Lastly, I’ll give brief mention to “TriM” and “PEW”, two French smashers joining Glutonny at EVO. Both are set to be in this pool, and it’s not impossible for PEW to beat VoiD or for TriM to give Shuton a run for his money, assuming TriM can upset Rick “Rickles” Aguayo in Pool I518.


Lower key than some of the previous pools, this is still a major opportunity for Japan to make a statement. Both “YOC” and Eita “HIKARU” Hoshi are on the same side of K510, both set to fight Mr E.

HIKARU placed an underwhelming 49th at Frostbite 2019 with respectable losses to Jon “Suarez” Suarez and James “Rivers” Wade, and has since been hitting things up strong in the Kanto scene. He primarily plays Pokémon Trainer, and EVO stands as a big opportunity for him to truly break out in Super Smash Bros. Ultimate.

Jonathan “Jw” Woldu and “Kome” are also set to face off, with the winner fighting Ezra “Samsora” Morris. Neither are favored to defeat Samsora, though with Jw’s win on Leonardo “MKLeo” Lopez and the volatility of best of 3, it’s plausible for Jw to go on another wonder run.

The projected final for the pool is Mr E vs. Samsora, but there’s a lot of potential wiggle room for both their brackets in the leadup to the pool final.

On the other side of the bracket is set to be Anthony “MuteAce” Hoo vs. Paris “Light” Ramirez. This is something of a coin flip, given Light’s recent performances and MuteAce’s capacity for upsets.

Suinoko is likely the best solo Young Link main in the world, while FOW is an ill-travelled Ness main well known for his peak achievements during the first half of Smash Wii U’s lifetime. They’ll have to fight each other for the chance to take on Light. FOW is seeded to beat Suinoko, but the outcome is fairly unpredictable.

Greil is ranked 3rd in France, making him an early challenger for Light that could keep him on his toes. The Wolf/Richter would have excellent prospects in the rest of the pool if he started it off by beating the top seed, and it would add another name to Europe’s growing list of set wins.

Finally, Mew2King is competing again. It’s hard to judge how well he’ll do, as he’s put a lot of focus into both his biography and streaming career. He’s been absent from Super Smash Bros. Melee for quite some time and has seen little success in Smash Ultimate, but he was known as a consistent wildcard in Super Smash Bros. for Wii U, and his run to beat Gonzalo “ZeRo” Barrios at GOML 2016 was fairly sudden. EVO could be the event for him to pop off at.


The first half of this pool features Nairoby “Nairo” Quezada running a lengthy Japanese bracket. Seima “Eim” Tomonoh could prove to be a very dangerous first round opponent, especially if all the hype surrounding Joker is true. Eim is Japan’s best Joker, having won a myriad of recent local events featuring a lot of Japan’s top talent.

If he were to slide past Eim, Nairo would then fight “Gackt”, a famed and dangerous Ness main who is no stranger to making big upsets happen. With recent data in mind, this is less likely to occur than an Eim upset, but still worth noting. Justin “Wizzrobe” Hallett is also on this side of the bracket, set to face Gackt, but it’s hard to gauge how well he’ll perform after a lackluster run at CEO 2019.

Nairo would need to fight Isami “T” Ikeda, a highly X-factored player on the recent Panda Global Rankings for Smash Ultimate. Notably, T has to defeat Ramin “Mr. R” Delshad in order to fight Nairo, a fight that in and of itself may be a close or unpredictable contest givenMr. R’s recent performance at Smash Factor 8.

The other side of the bracket has a likely (but minor) potential upset lined up - Tyrell “NAKAT” Coleman vs. Abadango. Abadango handily defeated NAKAT at Smash Factor 8 using his old Brawl main, Wario. The winner is directly lined up to fight Sota “Zackray” Okada, a fight he is favored to win.


While it’s not the most high profile pool on the list in terms of players, this will likely be the bloodiest.

Starting off, the top of the bracket has several familiar faces. Glutonny, France’s best and a top 15 ranked player, is set to win his pool. This is the only reasonable takeaway from the pool, but even this isn’t certain, as he’s set to fight Robert “Myran” Herrin. Glutonny historically has a losing record to Olimar players that goes all the way back to his GENESIS 6 set against Quinton “ImHip” Goodman.

He may not have to worry about Myran though. Myran’s suffered from severe consistency issues since late April, and he’s currently set to fight Griffin “Fatality” Miller, who defeated him at CEO 2019.

In another bracket twist, Fatality himself will first have to make it past “Flow”, France’s second best player and a possible contender for best Roy main.

On the other side of the bracket, Brian “Cosmos” Kalu is set to fight Rasheen “Dark Wizzy” Rose. Cosmos fell to Pedro “Prodigy” Alonso at the event Crown, and Dark Wizzy is considered to be the superior Mario - especially after his double elimination of Dabuz at Thunder Smash 2. This matchup could signal a serious challenge for Cosmos.

To close pools analysis, I’d like to direct attention to Dark Wizzy’s path to fight Cosmos. It includes “DoubleA”, a contender for best Shulk in Japan, and EVO 2018 Smash Wii U champion Bharat “Lima” Chintapall.

DoubleA recently made waves by defeating Zackray at a Kanto regional event, and match-up dynamics between Shulk and Mario could prove to be perilous for Dark Wizzy. We got both Nicko and Dark Wizzy at Thunder Smash 2, but they did not face each other, meaning there’s a lack of data going into EVO on how Dark Wizzy will fare in the match-up.

Lastly, Lima, EVO 2018’s controversial champion, will be making a rare out-of-state appearance at EVO 2019. Since Smash Ultimate, Lima has rarely attended events and largely stayed at local events upon his recent return, where his runs have been decent. He’s set to fight Dacota “Ryuga” James, but it is very difficult to gauge how well Lima will do with limited out-of-state attendance in recent months.

EVO’s size is unprecedented, and the sheer amount of talent at the event may never be matched again, or at least not any time soon. It’s hard to talk about concrete narratives going into an event as large as EVO. The best I could do was cover pools in some length, but numerous upsets that weren’t on my radar could happen.

I think it’s fair to say that most of what’s gone down is merely table setting for what’s to come. EVO 2019, Super Smash Con 2019, Shine 2019, Mainstage, The Big House, and other events in the coming 2-3 months will begin to define the player metagame of Smash Ultimate.

With Smash Factor 8 as our prelude, we can confidently say that MKLeo is not unstoppable. Beyond his losses to Tyler “Marss” Martin, he’s yet to fight a re-energized Gavin “Tweek” Dempsey, and he’s successfully evaded many of Japan’s strongest players - all of whom have a case to take him in the distance, especially in light of the challenge “ProtoBanham” gave him at CEO 2019.

The next few weeks will likely define Smash Ultimate as a game either ruled by few, or many. At over 3500 attendees, EVO 2019 will be a great leap into a new - and unknown - era of competitive Smash.
Last edited by a moderator: Aug 3, 2019

It's possible T can actually go on a long run if everything goes right. If he does miraculously manage to get past Mr.R and Nairo, he likely gets Zackray next, which based on their sets at a certain MSM and Sumabato SP 5, could go either way.
M2K, the second death pool, and Zackray are the most exciting parts for me on this whole set of pools.

Iridium said:
It's possible T can actually go on a long run if everything goes right. If he does miraculously manage to get past Mr.R and Nairo, he likely gets Zackray next, which based on their sets at a certain MSM and Sumabato SP 5, could go either way.
Click to expand...
Ooh, this I'd love to see.
You must log in or register to reply here.
Share: Facebook Twitter Reddit WhatsApp Email Link
Top