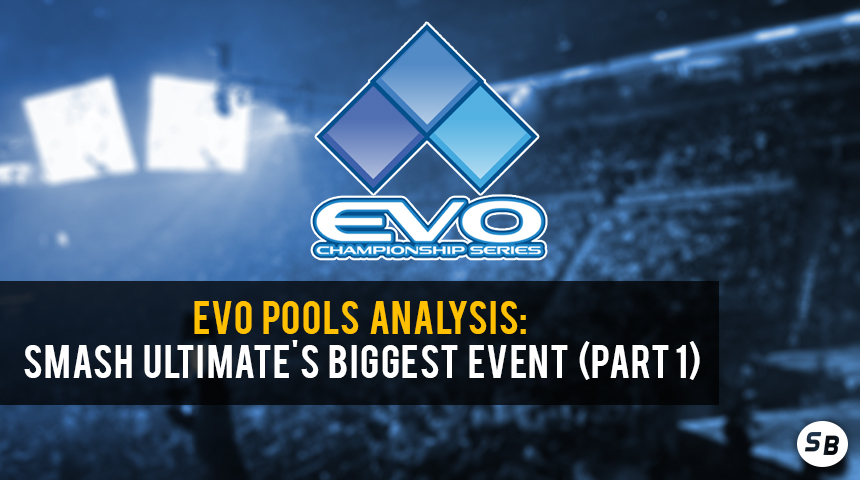 Sporting over 3,500 attendees, EVO 2019 will be – by far – the largest Smash tournament ever. With how stacked it is, It breaks the scale of multiple Tournament Tiering Systems and features broad attendance from many larger regions throughout the world. People from the U.S., Canada, Mexico, Central America, South America, the Caribbean, Europe, the Middle East, Japan, and Australia will all be vying for a high placing.

This article will focus primarily on Round 3 Pools, with scenarios offered for possible upsets. There are eight Round 3 pools, and I will list upsets likelihood, top players within those pools, and more! This is based on projected brackets on Smash.gg, with a link to the first pool provided here. (See the drop down menu in the top left corner for more pools.)


Our first pool is projected to feature a match between Leonardo “MKLeo” Lopez and David “LeoN” Leon in the last set. While this would normally be written off, MKLeo had some difficulties in Smash Wii U with heavy characters, and LeoN is hot off a peak 2nd at Defend the North, a Tristate major.

At Defend the North, he defeated Tyler “Marss” Martin and Samuel “Dabuz” Buzby in two unexpected upsets that resulted in the greatest solo-Bowser placement in the history of Smash. Can he beat MKLeo? In a best of three, it’s possible. EVO is a very volatile event, and MKLeo’s only EVO in Smash Wii U saw him falling to Corey “False” Shin’s Donkey Kong early during Winners Bracket. (He later fell to Anthony “MuteAce” Hoo in losers, a Peach main.)

While MKLeo vs. Leon is probably the primetime set of the pool, the other projected final - Chris “WaDi” Boston vs. Takuto “Kameme” Ono - can’t be ignored. WaDi has, thus far, been victim to many Japanese player runs, including “YB” and “ProtoBanham”. He is seeded to defeat Japan’s top Mega Man, but this could be a scenario where Kameme, hot off several big wins in both the USA and Japan, overwhelms WaDi and makes a relatively small upset.

Owing to the massive scale of the event, there’s still plenty more to look at. Yuki “Etsuji” Kajihara, a premier Lucina main from Japan, will be competing and is seeded to fight MKLeo in the semi-final of the pool. His chances aren’t great, especially considering he’s also focusing on Super Smash Bros. Brawl, a game which he was among the best-ever at. It’s worth mentioning, since he’s still a difficult opponent, notably placing top 16 at multiple Japanese majors this year.

A potential upset watch also belongs to LeoN vs. Pedro “Prodigy” Alonso. It’s easy to get caught up in the idea of LeoN vs. MKLeo, given MKLeo’s history, but Prodigy has Bowser experience through NorCal native “King Koopa”, and Prodigy himself has beaten far more accomplished opponents, such as Brian “Cosmos” Kalu. This is a set to watch.

I’d like to give a shoutout to “Tooky”, Saudi Arabia’s best player, a Top Pac-Man, and the best Middle Eastern player in attendance. If he upsets Brett “8BitMan” Esposito, he will get into Pool K500 on Winners Side. It’s impossible to gauge how likely this is or how far he’d go afterwards, but is nonetheless something to keep in mind.

Lastly, there are other highlights from this pool. Dustin “Zenyou” Rice, Randy “RFang” Fang, Charlie “Charliedaking” Antoun, Omar “Ozone” Qadah, and other regional talent from SoCal, Japan, Arizona, the Midwest, and so on. I focused on a few players, but there is always the chance that somebody I didn't cover much blows the narrative wide-open by taking a shot at one of the pools top seeds. Keep this in mind for future pools that I’ll be discussing.


In what is sure to be a more chaotic pool than Pool K500, a brief glance at projected brackets exposes a myriad of unpredictable sets.

While Gavin “Tweek” Dempsey’s path is arguably easier than MKLeo’s, he’s likely to fight “Lea” at the end of his pool. Lea is in contention for the title of “Best Greninja” and has the best run with Greninja to his name after a stellar 9th at Frostbite 2019.

Lea’s chance at getting to Tweek, however, is far less certain. In a bracket twist reminiscent of 2GGC: Greninja Saga’s brutal losers path that saw numerous top Greninjas eliminate one another, Lea will need to fight either Dennis “iStudying” Kwarteng or Guillermo “Stroder” Martinez Jr. in the semi-final of Pool K502.

How any of these matches go is hard to gauge. Lea is probably the most consistent of the three, but his data is the most lacking. Stroder is the most well attended, but is volatile at major events, and is known to use many more characters than just Greninja. Lastly, iStudying, a top European Greninja, could feasibly upset Stroder if his skillset is still as up-to-par in Smash Ultimate as it was in Smash Wii U.

The highlight match of the other side of Pool K502 is set to be “ProtoBanham” vs. Jestise “MVD” Negron. This is hard to gauge, as MVD is hot off a win at Thunder Smash 2, while ProtoBanham still has uncertainty surrounding him given his low attendance numbers. However, he was very close to defeating MKLeo at CEO 2019, meaning he may end up defeating MVD, as is seeded to happen.

Other potentially chaotic aspects to this pool include the preamble set between Okinawa’s best player, “J-Snake”, and iStudying. This occurs in I507, and could potentially be an upset leading into K502 since J-Snake’s skill is largely uncertain.

With K502, some minor sets to look at are Luis “Lui$” Oceguera vs. Cody “Skilly” Jordan, an odd face-off between a top NorCal player and Nebraska’s best. Skilly made a notable performance of 33rd at Frostbite, roughly in line with Lui$’s performances, though it’s unlikely either would defeat ProtoBanham in the following set.

Zack “ZD” Darby vs. Justin “Plup” McGrath is also worth looking at. ZD has dropped several sets to Super Smash Bros. Melee players in recent months, and Plup’s performances at majors suggest some potential for small upsets, especially considering this would be the only event Plup, normally a Melee-focused player, would need to put his time into.

Lastly, this pool marks the return of Calib “Konga” Myers, a famed Donkey Kong player that previously placed 3rd at Don’t Park on the Grass 2018. He’ll have a trial-by-fire facing MVD at the start of the pool, but Konga’s made major upsets at EVO before.


This is the first pool that can reasonably be referred to as a “Death Pool”, and my pick for must-watch pool of the event. Every set featured from semis onwards could be a potential upset, but upsets could start as early as round 1.

Matt “Elegant” Fitzpatrick is set to fight Marss in the pool final. With Elegant’s recent upswing at events like The Mang0 and Low Tier City 7, it’s plausible that Elegant could seize a set win from the newly minted major winner.

Both have serious challengers on the way to meeting each other in bracket. Marss will have to fight either Cesar “EKING” Rosa, Puerto Rico’s best player, or “Atelier”, one of Kansai’s best players and a top Wolf. EKING, a Pac-Man, has defeated Myran in tournament at Come to Papa 3. Atelier, meanwhile, notably won Sumabato SP 3, a Kansai super regional event.

Elegant is projected to first fight Andrew “ScAtt” Huntley, who recently placed 9th at Smash N’ Splash 5. Both of them could feasibly fall to regional talent like “Banana Boy”, a Utah Yoshi, or Joseph ‘Seagull Joe” Raucher before playing each other.

Any number of configurations could occur due to how close in skill many of these players are, especially when you add the unknown factor provided by players who rarely travel like EKING and Atelier.

The other side of this pool is guaranteed to be a bloodbath. Jason “ANTi” Bates will fight long-time Smasher “Masashi” in the first round of Round 3 Pools. Both have scattered records in this game, making the result very hard to predict.

Another potential upset watch set is ANTi or Masashi vs. Yuta “Nietono” Uejima, followed, again, by Nietono (or one of the prior two) versus Saleem “Salem” Young.

The highlight set that many are itching to see will be William “Leffen” Hjelte vs. Salem, a long-awaited grudge match that could prove to be explosive.

Salem’s character choices are erratic, and Leffen’s lack of activity makes his potential performance hard to predict. He could easily lose to Armando “AC” Villalobos if he’s off-kilter going into EVO, but pre-event training could net him his biggest win yet.

In the event that this set isn't streamed, the drama surrounding the two will likely make this a periscoped set, and you can bet there’ll be a lot of social media fallout regardless of the outcome.


This pool features a reasonable number of killers, but a lot of them will be running into very consistent players.

Eric “ESAM” Lew has become more consistent as a player in recent months, with Low Tier City 7 being his only major underperformance as of late. The biggest upsets that could be reasonably expected are Nicko Bonilla or Ricardo “Sinji” Mathison defeating him, both of whom he’s set to face in bracket. He could also end up fighting Eric “Pandarian” Lund, which would likely favor ESAM since ESAM historically has a 2-0 positive set record on him.

Dabuz stands to cruise to the main bracket, fighting “DD”, the top Australian player in attendance, “Zaki”, the world’s best King Dedede, and Shimizu “Umeki” Masaski, Japan’s top Peach. While it isn’t out of the question that Dabuz could get upset, he is notoriously consistent and rarely drops sets in pools. The last time this occurred was in February at Frostbite, where he lost to an underseeded Takuma “Tea” Hirooka.

One potentially explosive set that could change things up is Zack “CaptainZack” Lauth versus Umeki, set to take place in the semis of the pool. This could be a ditto between the two top Daisy players, or Zack could pull out Bayonetta - this is probably the biggest “upset watch” set in the pool.

Zack would likely have the best chance in this group of defeating Dabuz, however, it still wouldn’t be particularly high.

This concludes part 1 of pools analysis for EVO 2019. Tomorrow, I will be covering pools K508-K514, four more pools total! This will feature another major death pool, as well as pools that are sure to be more chaotic in light of recent events in Mexico and Japan. Thanks for reading!

Great article! Can’t wait to see EVO play out.
Out of all of these, I'm particularly hype for the Leffen/Salem grudge match. That death pool is absolutely insane!
You must log in or register to reply here.
Share: Facebook Twitter Reddit WhatsApp Email Link
Top Bottom