So with the release of Ultimate and more hands on time with the new characters and the old ones, I've had many new ideas in my head of how to "fix" or refine certain characters, but this game has, for the most part, fixed up a lot of things that I wanted in some way. Not particularly the ways I want, but the intention seemed to be the same. As such, I think putting out more condensed character redesign threads seemed good, especially for characters that seem to only need a few things or some crazy ideas I've had that don't migrate across the character's entire moveset like my Dr. Mario, Samus, Ice Climbers, and Bowser Jr. redesigns.

To start, I will talk about Donkey Kong.

For the most part, I like where DK is design wise. However, like Samus, I think he is a sort of time long since past for his general motif of how he is in Smash Bros. This is mostly because he is one of the original 12, and besides Link and Luigi, those twelve have not gotten serious overhauls really. While these ideas would be overhauls, they are not drastic enough to put them in their own full redesign thread. So I guess let me share my ideas now and cut to the chase.

Oh wow! No one saw this coming! A new move for DK involving throwing barrels! :O

But seriously, this should've been done. And the cool part about my interpretation here is that it works with Cargo throw and it spawns a normal barrel. This is where DK's passive ability to be much faster when holding heavy objects compared to everyone else comes into play, because his ability is now used in his moveset, and his cargo throw can translate its power at a distance, since when the barrels hit, they will act like DK threw the opponent with the corresponding throw. For not throwing it, this Barrel will actually block projectiles since he would hold the barrel similar to Donkey Kong Country 1, where it is held in front of him. Unlike that game, you can't run into someone to hurt them.

The main problem with using it as a spur of the moment blocking tool is that spawning it doesn't mean holding it, so blocking a projectile without holding the barrel means DK will promptly get hit by the barrel instead. However, DK can use other moves to roll the barrel along the path, like Giant Punch and FTilt, albeit with less power, but far faster than picking it up.

This move should give DK some much needed versatility in approaching as well as anti-approach in a sense, as well as great edgeguarding capabilities and kill potential off the stage.

Lastly, but certainly not least, due to it being grabbed as an item, it can be Z-dropped or thrown downward with Cargo Down throw, giving DK a MUCH, MUCH needed landing tool, something he has never really had. Granted, it requires setup, so it is still a weakness he can have in certain matchups, but in the right situations, it can bring back neutral quickly, or even maybe get a ceiling combo going.

WHOA! ANOTHER BARREL BASED MOVE!!!!!

This one is more appropriate to DK himself than his rendition of Dixie Kong we have now for his Up-B. However, just because this move is a better recovery in all directions, not just horizontal, it is still exploitable due to it not giving DK protection. Where this is better than the current one is verticality, as eluded to, and allows DK to take far more risks offstage when chasing the enemy and edgeguarding. Plus, the launch itself deals hefty damage and can be aimed in all directions. It even has kill potential if the launch of the barrel itself hits the opponent, making it good for surprise ledge traps, especially considering its low startup.

Like I said, these mini ones are very short and only for certain moves really. Let me know what you guys think.
Last edited: Oct 15, 2019
W

I didn't play smash 4 - did they actually change or replace moves with balance patches? If not, I don't think this is going to happen.

W1ZARD said:
I didn't play smash 4 - did they actually change or replace moves with balance patches? If not, I don't think this is going to happen.
Click to expand...

It's not supposed to be about direct requests, but just spitballing ideas for redesigns and rebalances for certain characters. It's also to spitball ideas for the Ultimate mod I will eventually make in the distant future (maybe around when Smash 6 is announced or earlier). 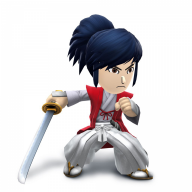 What about the Coconut Gun?

THE TemporaryFool said:
What about the Coconut Gun?
Click to expand...

I knew someone would bring that up.

I think one projectile is enough for a grappler style character like DK. Plus, barrel throwing is more iconic for him and barrel cannon is too. Those two aspects have been in every DK game, while Coconut Gun was only in DK64 to my knowledge.