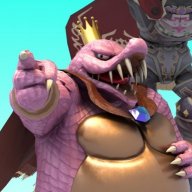 Hello all! My name is Val Zechta, and im a Boxer and singer first, but a cold doc second (eh... Eh...?!)
By that I mean Mac and Puff are my mains doc as my secondary.
I picked him up one day for no true reason, but insist going along with it. First tourney I went to, I used doc out of pols easy, and decided to keep him up with the crew. So an unlikely team I got, I know, but I grew affond of em.
I plan to keep using him and taking down some players to my office! Maybe with enough practice and such, going big and hoping to take that title of best doc as well!
And of coarse before anyone assumes like how many people only went doc after nairo vs. esam incident, I used doc beforehand and made him a secondary long ago!
How about ya'll? when did ya pick up doc ya'll Selves?
You must log in or register to reply here.
Share: Facebook Twitter Reddit WhatsApp Email Link
Top