Crabbageddon: What did it cost? 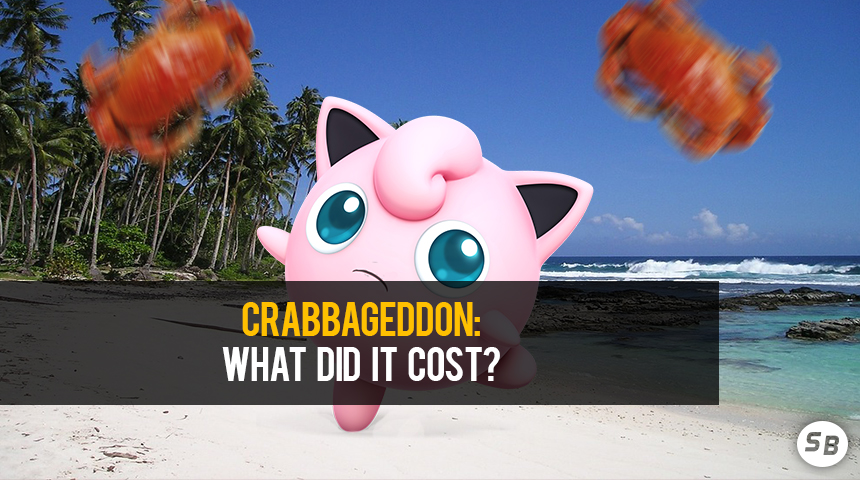 One month ago at Pound 2019, we saw a spectator throw a steamed crab at Juan “HungryBox” Debiedma. Many questions filled our minds, but the biggest question of all was:

Is HungryBox worth the hate value of whatever the crab cost?

The first step in solving this formula is simple; we need to find out how much the crab cost. Pound 2019 was located in Laurel, Maryland. Thanks to this site, we can see that during the 2018 crab season, the price of twelve adult crabs ranged from $42 USD (U.S. Dollars) to $86 USD, or about $3.50 or $7.17 per crab. Of course, these prices are from over a year ago, and crabs are currently out of season. Another possible reference is the Red Crab House in Laurel, MD, which at the time of writing serves steamed blue crab for $15. We could just assume that it came from Red Lobster or Olive Garden or whatever, but that’s not enough to display hate for HungryBox.

There is one other possibility to consider in this calculation: How much does it cost to catch a crab? Pontoon Opedia has a post about crab boats which can range from $80,000 to $160,000 on the used market and the highest is seven million—It’s highly doubtful that the person in question caught it themselves, though.

The minimum wage in Maryland is the easiest piece to calculate—it’s $10.10. This means that, to hit HungryBox with a crab that they bought, it would have cost about 20 minutes to an hour and a half of their time.

Is HungryBox worth the hate value of that? We had professional experts from both sides weigh in their thoughts,

Were they just that crabby?

Author’s Note: Will you eat a crab tonight? How much do you think the crab costed? Let us know in the comments below!
Last edited: Jun 1, 2019

now THIS is the content I subscribed for
The answer: Everything.


I'll leave now.
Man I want to laugh at the absurdity of the situation, but jeez why do smash tournaments always have so much weird drama? Throwing crabs at people ain't normal.
Holy Crab!
Nobody:
ThirdKoopa: Crabbageddon: what did it cost

Jigglypuff is secretly the most OP character and will slay 20XX.
The TOH-YAH fears the Rest.
Content™
__

Holy Crab is right.
I get it's a joke, but I'm disappointed that this isn't an actual article about the aftermath of the incident that ends with "the crab tosser (both words being used figuratively and literally here.) was found, excommunicated from the Smash community, banned from all formal tournament events, and promptly and swiftly executed by guillotine.
Ah yes, I remember hearing about the crab incident, as well as the video.
Ill tell you what it cost. peoples view on Melee/smash fandom
The player got the Giant Enemy Crab meme completely backwards and thought he had to hit his opponent's weak point for massive damage with it.
Last edited: Jun 2, 2019
professional ****posting
This might be the best thing I've read on this site

we hope to keep delivering high quality content to you then

Thirdkoopa said:
Why the crab?

They were certainly being shelfish, that's for sure.
r/theydidthemath

Now that is quality content
I'm cotinually reminded of this: https://www.google.com/amp/s/www.golf.com/ap-news/fan-explains-why-he-threw-hot-dog-tiger-woods/amp/

“I threw the hot dog toward Tiger Woods because I was inspired by the movie ‘Drive,'” Kelly said. “As soon as the movie ended, I thought to myself, ‘I have to do something courageous and epic. I have to throw a hot dog on the green in front of Tiger.'”
"Did you do it?"
"Yes."
"And what did it cost?"
"About 20 minutes to an hour and a half of my time."
Not gonna lie, when I first clicked on this I thought it would be about the social repercussions on the professional smash community because of the crab being thrown, not a literal analysis of the time/money that would have gone into the crab being thrown.


Is HungryBox worth the hate value of that? We had professional experts from both sides weigh in their thoughts,
Click to expand...

qerl08 said:
Honestly I expected a rickroll
Click to expand...

You missed the perfect opportunity to change the embedded link in quotes to an actual Rickroll. Just sayin'.
Honestly, I feel bad for the crab more than for Hungrybox.
Last edited: Jun 4, 2019
Are we certain it wasn't a homage to the original Mario Bros. Game?
You must log in or register to reply here.
Share:
Facebook Twitter Reddit WhatsApp Email Link
Top Bottom