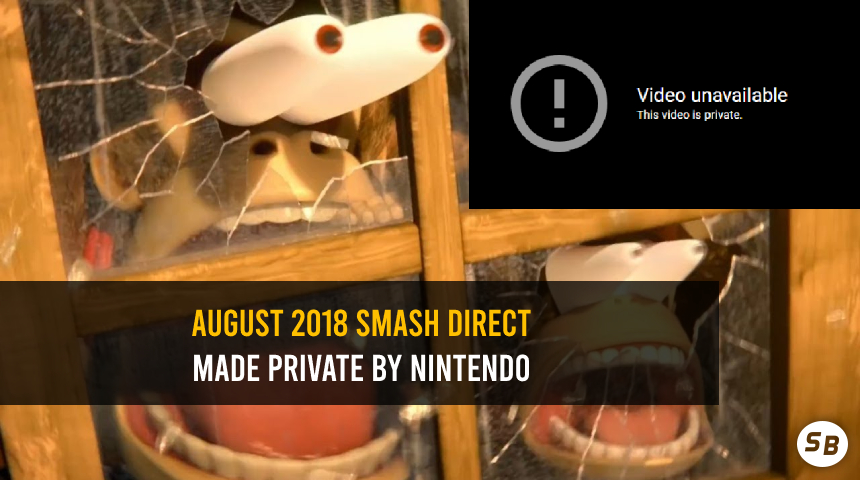 Sometime around August 4th, 2021, the August 2018 Direct Smash Ultimate Direct has begun to vanish off of Nintendo’s official Youtube channels and websites. If you try to watch the August 2018 Direct by visiting its link from the official North American Nintendo Youtube channel, you’ll find that the video has been made private and thus unviewable. The same has happened with other versions of the Direct, such as the Chinese and UK versions on their respective Nintendo channels. Meanwhile, the Australian channel just outright deleted their version of the Direct. This was not an instantaneous process either, as the Japanese Direct lasted for a few days longer but then went private on August 6th.

The disappearance of this specific Direct is not just limited to Youtube. On the Japanese Smash website under the movies section, the August Direct has been taken down from there as well. The videos are listed in order from right to left, and yet the only Smash Directs present are the E3 2018 and November 2018 ones. 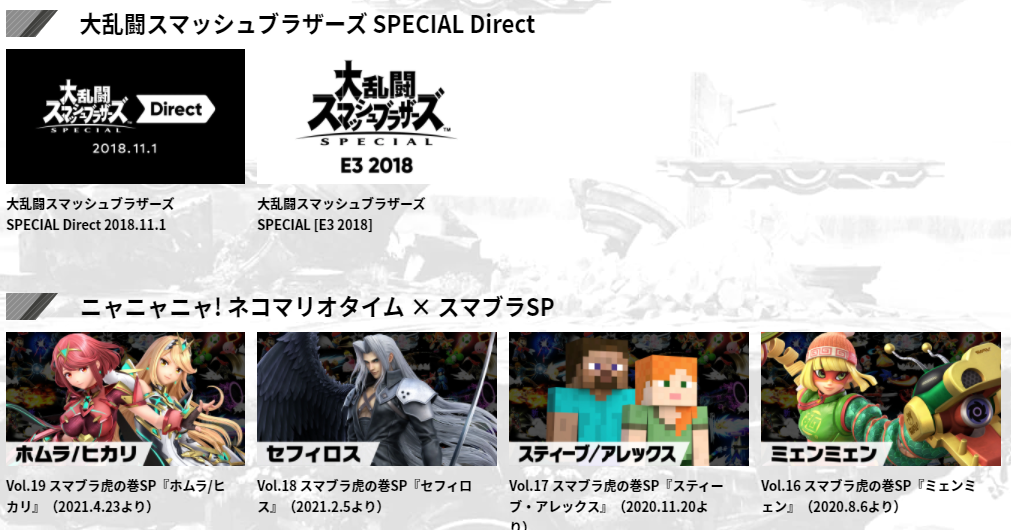 It’s worth noting that the individual reveal trailers for the Belmonts and K. Rool are still up on Nintendo’s channels. You can watch them here and here respectively. However, it is also worth noting that Chrom and Dark Samus reveals are no longer officially viewable since they never got their own individual trailers.

Airing exactly 3 years ago from today, the August 8th 2018 Direct was one to be remembered. This Direct saw the reveal of 5 characters for Ultimate, those being 2 newcomers (Simon and King K. Rool) as well as 3 echoes (Richter, Chrom, and Dark Samus). Other announcements included the entire stage lineup for Ultimate, the new Squad Strike mode, and much more. You can find a full summary of the contents of the Direct here and watch a reuploaded version of it here.

As of this writing, no statement has been given for this unexpected removal. Only time will tell if we ever learn the reasoning for this.


Author’s Note: Why do you think the August 2018 Direct was made private? Let us know in the comments below!

If I had to guess, some regulation or rights issue along the line has caused some issue and Nintendo were hoping to just private it and forget about it, not realising how obsessive we here in the Smash community can be.
Honestly? I don't even know. I'm just gonna wait until...something comes out of this.
This doesn't mean anything.
maybe its because of some comments?

Oracle Link said:
maybe its because of some comments?
Click to expand...

They would just disable the comments then.
The closing of the Tokyo Olympics was yesterday. So at this point, IDK and it could be anything. The smash community is closely watching out for any hints to reaching the end of the last challenger.

Whatever the reason is, I hope Nintendo says something about this. It couldn't be music copyrights, the other trailers would've been taken down, too. It couldn't be for M-rated stuff, the Joker stuff would've been nuked, too. I don't think it was an actress contract expiring either, because if that were the case, than other Smash commercials would've been nuked over their specific contracts, too. Whatever it is, it's just the weirdest thing.
Last edited: Aug 9, 2021

Dukefire said:
The closing of the Tokyo Olympics was yesterday. So at this point, IDK and it could be anything. The smash community is closely watching out for any hints to reaching the end of the last challenger.View attachment 325757
Click to expand...

Lucky from the Google Doodle game is joining Smash confirmed.
this still confuses me
I highly doubt this has anything to do with it but I was recently seeing people making joking tweets like 'oh, they're already announcing the last Smash fighter' while quote tweeting the tweet from Nintendo about this very Direct. People hoping others wouldn't notice the year or just getting people falsely hyped till they notice the year. I've got no idea why they'd private the video though.
Still baffled as to why they would do this. Makes no sense. Even if we have a reveal coming soon, why wipe out a piece of history?
Do you think someone might reupload the direct in case it doesn't come back?

Dukefire said:
Do you think someone might reupload the direct in case it doesn't come back?
Click to expand...

I mean, it's still up on Twitch rn. But to answer your question, yeah, I actually have seen a reupload of it.
I might have the Direct of August 8th video. So, it can be posted on youtube.

Besides, the Direct is mostly from reactions from my experience of finding it.
Actually, I know why.

KingofUSA85 said:
This doesn't mean anything.
Click to expand...

I mean you never know

A new #IndieWorld Showcase arrives on Aug. 11 at 9 AM PT / 12 PM ET! Tune in for roughly 20 minutes of information on upcoming indie games heading to #NintendoSwitch.

An Indie Workd just got announced.

Not that I think the two are related, but maybe this'll lead to something big? Normal Directs usually come after Indie Worlds.

A new #IndieWorld Showcase arrives on Aug. 11 at 9 AM PT / 12 PM ET! Tune in for roughly 20 minutes of information on upcoming indie games heading to #NintendoSwitch.

An Indie Workd just got announced.

Not that I think the two are related, but maybe this'll lead to something big? Normal Directs usually come after Indie Worlds.

He didn't say it'd be longer. He just said it'd be a while, which isn't very specific.
For me it's super-obvious that the last character will be revealed at the Video Game Awards this year.
community go brrrrrrr
You must log in or register to reply here.
Share:
Facebook Twitter Reddit WhatsApp Email Link
Top Bottom