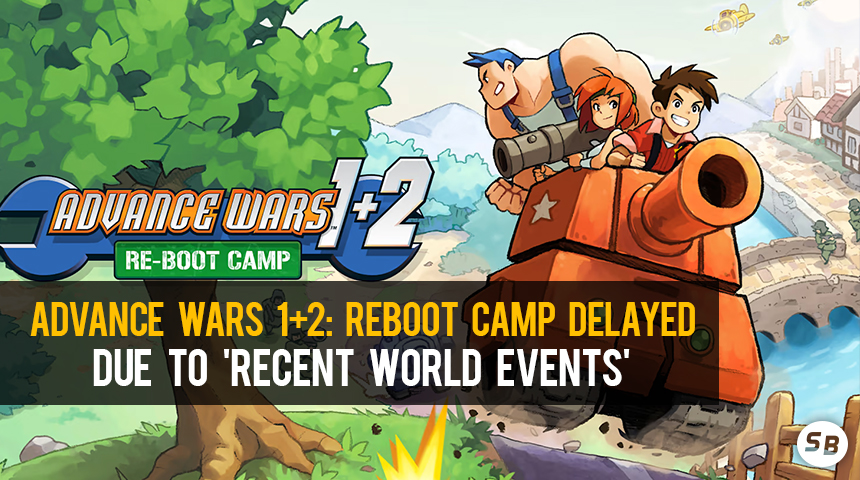 Nintendo has just announced that Advance Wars 1+2: Reboot Camp, previously slated for an April 8th release date, has been delayed. You can check out Nintendo's full statement below:

In light of recent world events, we have made the decision to delay Advance Wars 1+2: Re-Boot Camp, which was originally scheduled to release on Nintendo Switch on April 8th. Please stay tuned for updates on a new release date.

Although it was not stated which specific world event caused the delay, it can be assumed that this decision was due to the recent Russian invasion of Ukraine. The invasion has been the top story for weeks across the world, and has resulted in many people including game developers to show their support for Ukraine and its people.

Advance Wars in particular is centered around warfare in urban environments, with the very first enemy in the game even being largely Russian-inspired. Nintendo most likely saw it in bad taste to release the game amidst the ongoing real world conflict. This is not the first time the Advance Wars series has had its release affected by real world events, as the Japanese and European releases of the first Advance Wars game were pushed back due to the September 11th attacks in 2001 (the American release was on September 10th so it was unaffected there). The first Advance Wars game did not get released in Japan until 2004 where it was included in one package with the second game. This is not even the first time Reboot Camp in particular has been delayed, as it was originally slated for a December 2021 release but then pushed back to April.

There is currently no release date for Reboot Camp as of this writing. Additionally, the game has been removed from the eShop. Only time will tell what lies in store for the long-awaited revival of the Advance Wars series.


Author's Note: How do you feel about this delay? Let us know in the comments below! Oh and also the Advance Wars games are great so please check this game it if it ever when it releases.
Last edited: Mar 12, 2022

though I swear some of the others came out during a war
Yeah this does seem pretty insensitive to countries that were going through a war when previous nintendo wars games released and I think it’s pretty silly that they’d do this but I don’t really think it’s that big a deal
On one hand, it does make sense to delay the game in light of what's going on in Ukraine right now, especially when WW3 is a genuine fear many people have. On the other, though, I don't think it's too much of a big deal. As unfortunate as it is, war is pretty much an ongoing thing in the world today, so if Nintendo's waiting for total world peace to release Reboot Camp, they're gonna be waiting for a while.

The whole situation sucks on all ends, but I feel like what Nintendo's doing right now is for the best. I feel as if they'd recieve some sort of backlash no matter what they did, so I guess they went with the option they felt would cause the least issues. Real shame for Advance Wars fans (I was actually kinda interested in the game), and hopefully things can get better.
I feel like this is the best course of action right now.
I was actually looking forward to this since I’ve never played the original but given the circumstances, it’s for the best. No doubt about it.
For the sake of humanity, it is a reasonable delay.
It sucks that people will have to wait to play it but understandable, not the right time to put out a game that makes war look fun.
Unfortunate, but understandable as well, considering the seriousness of the conflict at Ukraine.
It probably wouldn't be delayed if it didn't have the word war in the title.

Inkling Man said:
It probably wouldn't be delayed if it didn't have the word war in the title.
Click to expand...

It probably would have considering the opening has the game’s equivalent of Russia invading another country.
Last edited: Mar 12, 2022
I do not know if this delay is really good. Looking back at history, it seems like people in times of war often like to consume media about war. For example, look at superhero comic book history or movie history and you will notice that the media released during wartime often focuses on war. Of course, a lot of that had to do with propaganda, but many of these publications were very popular so clearly people like media that is relevant to them, even if that means that it must be about war. I think that a lot of people suffering from war would not mind if a war game got released. I fled my own country but I am still attracted to media that reflects the state that my original country was in. To me such media is not offensive. To me such media is grounded and relevant.

On the other hand, this could be the right move for various reason. I think that there is probably no way to know for sure.
Last edited: Mar 12, 2022
Like I said, I think Nintendo would have gotten flack no matter what they did. If they hadn't delayed it, I'm willing to bet that a lot of people would have called the game's release insensitive once its former release date hit, and when they did delay it, they're getting people saying that the move is unneccesary and more of a show of good faith to make them look good. I'm not saying either side is right, I'm just saying Nintendo would be criticized either way (I think delaying it is the right call here, but I do understand your take on wartime-based media).
Man, Advance Wars keeps getting hit with bad luck, huh? First 9/11 happens literally the day after the first game releases, and now this war happens just as the game was all set to come out.
Last edited: Mar 16, 2022
This situation sucks but its completely understandable given the context of both the game and the world events being referred to. This series really is cursed, first the first game comes out during the 9/11 aftermath and now this.

While I am admittedly bummed, it's not as if I don't have tons of other games/movies/tv shows in my backlog anyways. And to be honest, having a single game delayed is a relatively minor inconvenience in my life in the grand scheme of things, and I'm fully aware that it's nothing compared to the suffering those poor Ukrainians are going through right now.
Interesting series on the DS.
The sooner Putin is stopped, the better. Isn't the war his fault?
Last edited: Mar 20, 2022
i noticed Fortnite is still going ahead with its all-out WAR!!! theme. i hope Reboot Camp comes out soon, that was my most hyped game so far this year!
You must log in or register to reply here.
Share:
Facebook Twitter Reddit WhatsApp Email Link
Top Bottom