A Fistful of Dollars Could Help the Little Mac Community 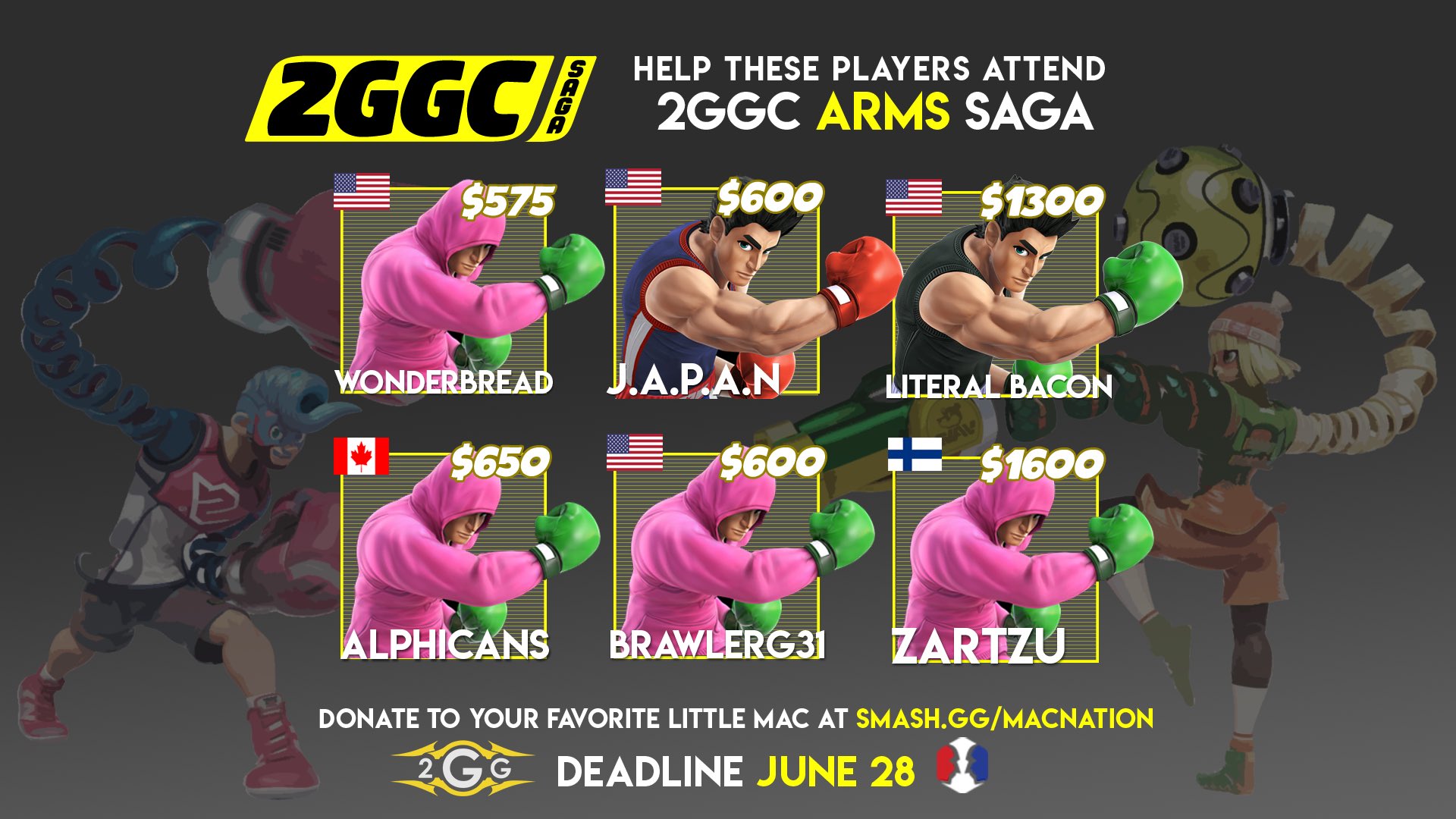 The Little Mac community needs you! -- to help some of its community members get to the latest 2GGaming-organized event.

With the advent of 2GGC: ARMS Saga, an event tailored towards all things Nintendo and punching, 2GGaming has made it a priority to bring all notable Little Macs under one roof. In order to do so, the Californian organization launched a crowdfunding campaign on June 21 to fund the following players' flights:
Crowdfunding has increasingly become popular in the Smash Bros. scene. Beginning with the Big House 5 in 2015, crowdfunding has been used by event organizers as a tool to improve tournaments or fly out players who do not have the means to do so.

As with most Smash Bros. community fundraisers, the campaign makes use of a smash.gg storefront where prospective backers may purchase a variety of goods such as apparel and art. A percentage of each sale goes towards the travel fund of the player a backer chooses and if enough money is allocated to said player, they are flown out. In addition to the Little Macs, the campaign also aims to fund a Japanese delegation to 2GGC: ARMS Saga and EVO 2017 comprised of:
Should you want to help develop the Little Mac community, backing this campaign is your chance to do so.

2GGC: ARMS Saga is a Super Smash Bros. for Wii U and ARMS event set to be held on July 8 - 9 at the Esports Arena in Santa Ana, California. Apart from the fistful of Little Macs the event is centered upon, top professionals such as Gonzalo "ZeRo" Barrios and Samuel "Dabuz" Buzby will be in attendance due to the stakes: a $2500 pot bonus and a coveted 2GG Championship Saga slot. Registrations for the event via smashgg are open until July 5.
Last edited: Jun 25, 2017

Afraid I'm broke, good luck though!
Disgusting. I would never help supporters of such a trash character.
Unable to fund, but I wish Team Japan and the macs best of luck in making it here.
If only I had money to help...

PsychoJosh said:
Disgusting. I would never help supporters of such a trash character.
Click to expand...

No, Hes Right. It's pretty disgusting. What a Trash character and I highly doubt no matter how skilled these players might be, they would get top 8. So its not something many people would pay money for unless you know one of the personally, or are a Mac Main.
WonderBread, Alphicans, and Brawler are good, and deserve a chance, but nobody's gonna fund them cause they can't "break the curse"... pretty lame. The others, IDK. And Team Japan, only half of them need funding, the others have sponsorship and are in the States very often.
Last edited: Jun 26, 2017
As much as I want to help, I am unable to fund. But I shall pray for the players. Y'all never know, Mac may come out on top (or at least top 8) for once.

MMST|Ven said:
No, Hes Right. It's pretty disgusting. What a Trash character and I highly doubt no matter how skilled these players might be, they would get top 8. So its not something many people would pay money for unless you know one of the personally, or are a Mac Main.
Click to expand...

what makes you think that he's trash?
it's not that these players are trash but it's the character. Mac has never made it to top 8 in any notable tournaments recently. Do i want them to come? Yes. Do l like the character? No. Easily gimpable with the right strategies and can be killed at very early percents.
Unfortunately, I am unable tof und. Good luck though.
You must log in or register to reply here.
Share:
Facebook Twitter Reddit WhatsApp Email Link
Top Bottom