With the end of the year, a laundry list of upsets, streaks, comebacks, hype matches and surprise character picks behind us, the question that comes now: “How do we rank all of this?” Thankfully, Panda Global takes meticulous time and effort every year. Yes, the rankings for both major Smash titles are approaching.

For those who may be new to Smash in either community, the PGR, or the Panda Global Rankings, are what we use to rank the top players around the world based on their results. Panda Global is an esports organization that has sponsored multiple players from the Smash community over the years such as Eric “Esam” Lew, Justin “Plup” McGrath, and other fighting game players outside of Smash. The only difference between the two rankings is that the Ultimate PGR contains 50 players and the Melee PGR goes up to 100 players.

The ranking reveals for both Ultimate and Melee begin January 13th. We will know who is crowned number one for Ultimate on the 23rd and Melee will know on the 24th 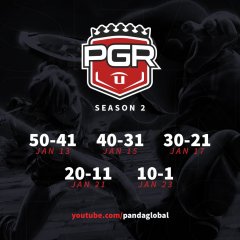 ​
Author’s Note: What do you think? Who should be where?