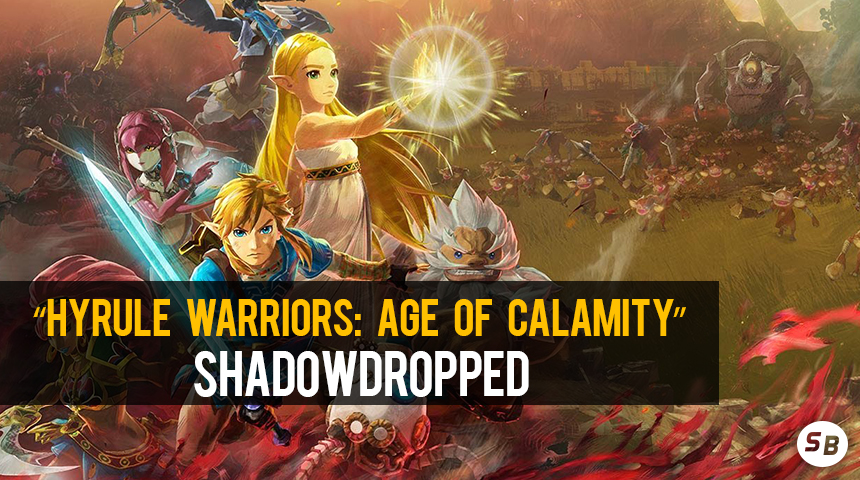 2020 has been a rather topsy-turvy year for many of us and that’s especially true if you take into account the seeming lack of general Nintendo Directs. The last general Direct was last September with Banjo & Kazooie’s Sakurai Presents and Terry’s reveal. We just passed the one year mark and yet there's still nothing in sight.

However, Nintendo has still been showing new content, just at a more gradual pace than before with the reveal of Partner Presentations, Pokémon Sword and Shield DLC, Paper Mario: The Origami King, Super Mario 3D All-Stars, and, well, something a bit more.... legendary.

Announcing a new title set 100 years before The Legend of #Zelda: Breath of the Wild, presented by the developers from Nintendo and KOEI Tecmo Games.

Nintendo shadow-dropped a new chapter in the beloved Hyrule Warriors franchise earlier today with a new game called Hyrule Warriors: Age of Calamity. Much like before, Koei Tecmo developed the game and it is heavily based on their Warriors series which includes titles such as Dynasty Warriors, Samurai Warriors, Fire Emblem Warriors, ONE PIECE: Pirate Warriors and many more. It may not be the first Hyrule Warriors game released on the Switch but quite surprisingly this is an entirely new installment in the series. According to official information, the game will take place one hundred years before the story of The Legend of Zelda: The Breath of The Wild and focus on the events which saw the rise of Calamity Ganon and fall of Zelda’s Champion, Link.


It’s unknown if other Hyrule Warrior characters such as Sheik, Wind Waker Link, Skull Kid, Linkle, and more will also be featured but several characters were shown off in the six-minute trailer:
Unlike the previous Hyrule Warriors games, this will actually be canonical and set within the storyline of Breath of the Wild. Speculation is aflutter over who might be playable but, unlike before, the roster is constrained to the canon. This includes characters such as Kass, Beedle, Master Kohga, Prince Sidon, and Monk Maz Koshia who all may or may not have had a hand in the events that transpired back then. However, there are many who believe that the Yiga and Ganonblights will be heavily featured and perhaps even playable. It’s unknown if it will feature the crossover elements that its predecessor had. Additional content such as enemies which includes Lynels and Hinox as well as well-known locations within the first Breath of the Wild are set to return. With the Breath of The Wild sequel currently under development and set for release possibly by next year, this title could help tide people over until then. It should also be mentioned that the Champions Amiibo will also be rereleased.

Amiibo for the four Champions: Daruk, Urbosa, Mipha, and Revali will be relaunching alongside #HyruleWarriors: Age of Calamity on 11/20! pic.twitter.com/eGynZdKfSA

You can visit the official website here for more future information. The game is set to launch November 20th, 2020 and is hopefully one of many games Nintendo has set for its holiday lineup. Those who preorder the digital version of game will receive a limited-time special bonus, the Lucky Ladle item!

Author’s Note: I love Hyrule Warriors and I had tons of fun playing it but I was always curious how they would go about with a sequel. While it’s not the sequel I was expecting (c’mon, where’s Tingle, Groose, Vaati, and Link’s Uncle?!); I’m still very interested in seeing how they will go about with this game.

weve been geeking out like crazy
I like what's being released so far but man, i really hate that trend of shadowdropping everything.
I heard that they wanted to move away from Nintendo Directs but i don't think that's the right way to do it.
It's possible I'm in the minority on this one, but I don't mind shadow drops at all. They don't seem like half assed trailers, so I get that they could have just as easily packaged them together into one Direct, but new content is new content. Whenever they're ready to show it is fine to me.

OnyanRings said:
I like what's being released so far but man, i really hate that trend of shadowdropping everything.
I heard that they wanted to move away from Nintendo Directs but i don't think that's the right way to do it.
Click to expand...

It takes time and money to make the Directs. It also puts pressure on the developers to "find the right things" to show us. Meanwhile every other company just drops a name+approximate release. Maybe show the completed game intro. Both things get the same hype at the end of it all.

Rather interesting how a spin-off title will actually be canon to the Breath of the Wild timeline. At least we'll finally know all the events that happened before the Great Calamity.
Well I’ll be labbing this game out for thousands of hours just like the first three games. Look forward to a huge amount of info.
You know, this makes me want a Fire Emblem Warriors game that takes place mainly during the time skip in Three Houses.

Lil Puddin said:
It takes time and money to make the Directs. It also puts pressure on the developers to "find the right things" to show us. Meanwhile every other company just drops a name+approximate release. Maybe show the completed game intro. Both things get the same hype at the end of it all.

Yeah, you're not wrong. Still though, nothing beats a nice juicy direct.
This was also nice to see, while not the BotW sequel I'm waiting for, I wasn't expecting news for that to come so soon anyway. We'll actually get some lore BotW hadn't fully fleshed out, interesting seeing this occur in Hyrule Warriors of all things though.
Since the skull kid dlc in Cadence of Hyrule comes out a little before the next infodump on this game... kinda hoping Cadence or Octavo get in on this.
You must log in or register to reply here.
Share:
Facebook Twitter Reddit WhatsApp Email Link
Top Bottom