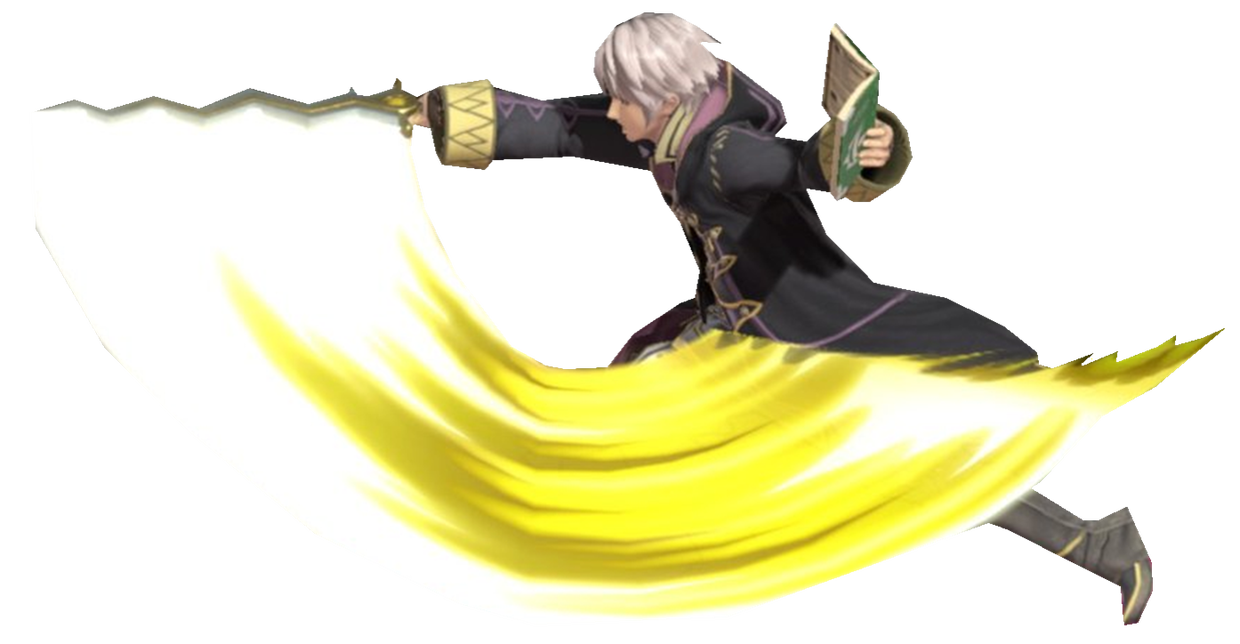 The A+B smash attack setting has been a part of the smash series ever since Smash 4’s 1.0.6 update, but no character has had any kind of real benefit from such a setting with the sole exception of Robin. In smash 4, A+B smash could be used as an alternative method of unleashing levin sword aerials without the need to manually input the command like a standard smash attack, easing the effort required on the control stick. Unfortunately, this was utterly overshadowed by the C-stick, as most Robin players, and players in general, preferred to use the C-stick for all aerials requiring directional inputs, and for Robin mains specifically, the C-stick also meant easy levin aerials with complete independence from the control stick. And so the A+B smash method would languish in obscurity, forgotten entirely.


Until Smash Ultimate came around.​
In this new and improved game, the developers saw fit to give renewed purpose and power to A+B smash, a power that only Robin can harness. Herein I will elaborate on the unique properties of the setting and how Robin players can utilise it to help bring their game to new, greater heights.


Overview for the Uninitiated​
So, A+B smash. What is it, and how do you do it? Well, as explained above, it's an alternative method of performing smash attacks. Doing it is as simple as pressing down the A button and the B button at the same time. Doing this on the ground will unleash a forward smash attack, and in the air will yield a neutral aerial attack with the levin sword if it's available. You can also perform up and down smash attacks by also pressing up or down on the control stick respectively, and aerials of all directions with the corresponding directional input. For Robin in particular, this is useful for getting levin neutral air attacks out without the need to use another levin sword attack beforehand.

(Please note: the buttons used do not need to be the literal A and B buttons, they need only be whatever you have your standard attack button and special move mapped to. You can even set them both as shoulder buttons if so desired!)


A Well Hidden Secret​
Now that we are well familiar with the technique, we can now get into the meat of things. Most players input the A+B command by pressing down on the buttons at the same time, but unbeknownst to many, there is a certain flaw to this input method; user error allows for the chance that one of the two buttons is pressed slightly before the other. This can cause at best a weaker attack than originally intended, and at worst a special move to come out that would take a small miracle to unintentionally land, or ruin stage control and place yourself in disadvantage in the event the special move was up b.

Very thankfully, however, there is a newly discovered property of the technique that works around this issue entirely; The A and B buttons need not be pressed at the same time. The only requirement is both buttons need to be held down together.

What this means is that you are able to press down one button, whether it's A or B, and then without releasing it press down the other button. This will yield identical results to the conventional ‘press at the same time’ input while completely eliminating the chances of an accidental misinput. In addition, it allows for easy and seamless transitions from bronze sword to levin sword attacks in the middle of strings/combos.

Here are some situations in which this unique trait can be utilised:


The common theme here is the execution for a lot of Robin's already established tactics and gameplay improves with the addition of A+B smash, reducing the human error factor greatly. The only issue is that consistent integration will be a hurdle to overcome for players already accustomed to their old control schemes, but this can be circumvented with practice.


Other Interesting Properties
​
There are a few other odd traits that can be potentially helpful to players. As it it turns out, holding down the A or B buttons after the associated action has some interesting implications. Should you decide to hold down the B button for any extended amount of time, you will still be able to control your character at near full capacity, though some adjustments will need to be made.

When holding B (after cancelling or going through the associated specials animation) you will be able to perform almost any action your character could do before with some exceptions. Those exceptions are:


With tilt stick enabled, you will be able to access tilts without the need to press A, and when shielding you're ability to dodge on the ground (both rolling and spotdodging) will be replaced with easy shield shifting, which is useful for preventing shieldpokes when undergoing shield pressure. You will also still be able to airdodge and grab items in the air with your grab button, and you can even throw items with A+B. Note: Items thrown in this way will always result in a smash throw, so the item will be guaranteed to be thrown at maximum speed and damage. Keep in mind that all of the drawbacks can be immediately cancelled by merely releasing B.

Lastly, there is one more thing of note that will be more of interest to labbers. By having tilt stick enabled and holding down the A button, you can input left or right on the C stick to cause your character to “shimmy” to the left or right by a VERY small margin. This can useful for microspacing while labbing out attack or combo ranges. This strange little property can also be used for every character, not just Robin.


In Closing​
Incorporating A+B smash into our gameplay consistently may prove a challenge for many at first, but I believe that by doing so Robin players will be one step closer to reaching truly optimal gameplay and making great pushes in the metagame at large.

I had no idea about this, and I like to play Robin as a side character sometimes. I can implement this into my gameplay now.
I changed my control scheme to make better use of this tech; being able to guarantee a Levin Nair has been really useful. Really informative
Read more…
Top Bottom