The Goddess Can Indeed Combo

Alright, last time I discussed how to go into the Hallehoohaw and Holy Ken Combos Palutena has when using Lightweight, one of the best specials in the game, as well as the approximate percentage windows your opponent will need to be in to pull them off; this time I want to talk about some combos and strings that she can do to help rack up damage, as well as some tips to help make them easier whenever I can think of any. The goddess of light may not have a punish game as good as Sheik or Luigi, but she can still pull off some good combos that combined with good smash attacks and kill setups at 100 – 120 make her a foe to be reckoned with.

Let’s start off with some stuff that can be done with a default moveset before talking about strings that are made possible due to Lightweight (for better or worse Customs will likely be removed from most tournaments after EVO regardless of what they contribute to the game). First off for those who don’t know Palutena has a great jab that can often lead into other moves like grabs if tapped or twice briefly to stun your opponent; if and when you go for a grab know that Palutena’s grab is riskier than many to use due to its longer lag on a whiff (it also has slightly better range though, on the flipside).

Okay, the easiest combo off of a grab into d-throw (Palutena’s best one) is a f-air, which is very easy to land at low and mid percentages and deals a nice 15 damage if initiated by a jab. However, a simple change to a b-air will increase this number to 20; you can make b-airs a little easier by lightly holding the directional input the opposite way you are facing during the throw animation until tapping the jump button, at which time your character will turn around and you can resume moving towards your opponent while pressing the attack button. 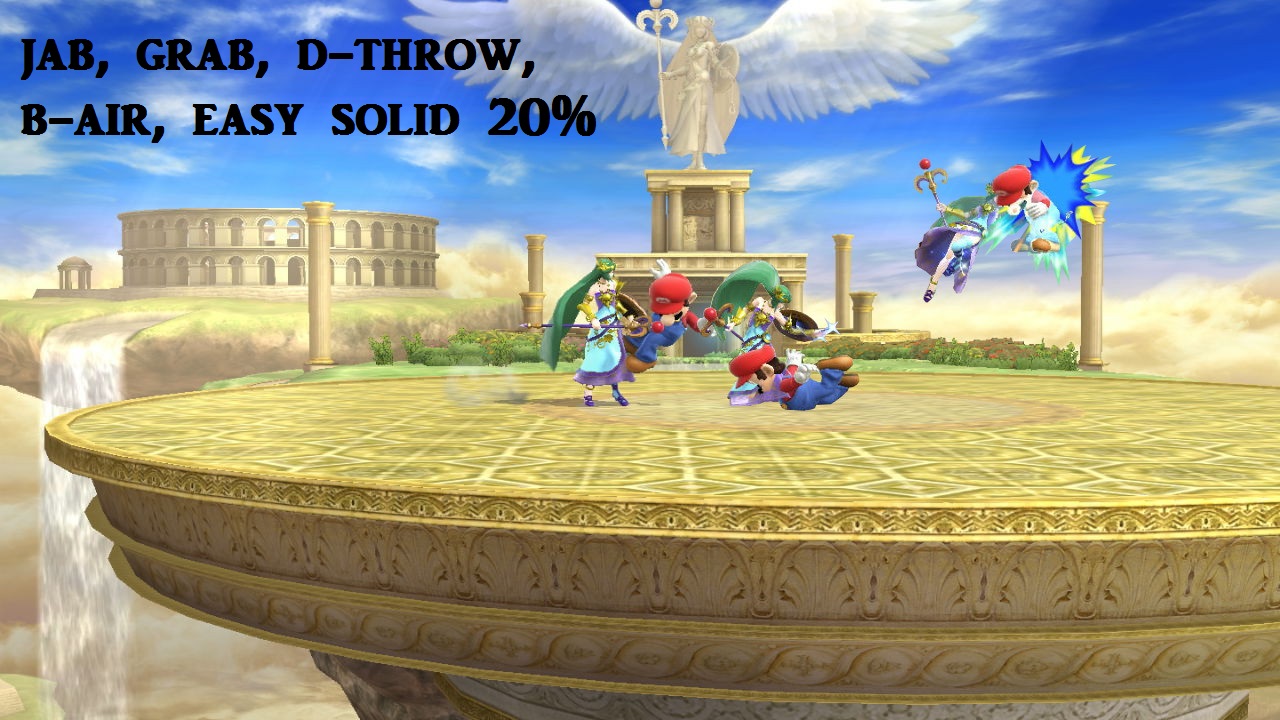 Another option you can try is n-air after a d-throw, which places your opponent at a good place for a jump u-air follow-up in some cases (Remember that lightly holding the back directional input until the last hit of the n-air can help ensure your opponent remains in front of you). Mario for instance between 10 and 30 damage can be comboed in this manner. Below this the u-air often misses high, and above it you will likely miss to the side or be too low especially if your opponent uses DI correctly. It’s no Hallehoohaw, but it does have the potential to do 27 damage. Or you can try n-air, jump, into f-air if your opponent seems slightly too far. Heck, even n-air into another n-air is possible at about the same percent depending on DI.

And for those who use ‘tap jump’, a tip for executing an u-air without jumping after say a f-air is to start holding ‘up’ while the f-air is coming out, so that the controller will not execute a jump because of the current animation. And if your opponent falls out behind you, a b-air may well connect if done quickly. 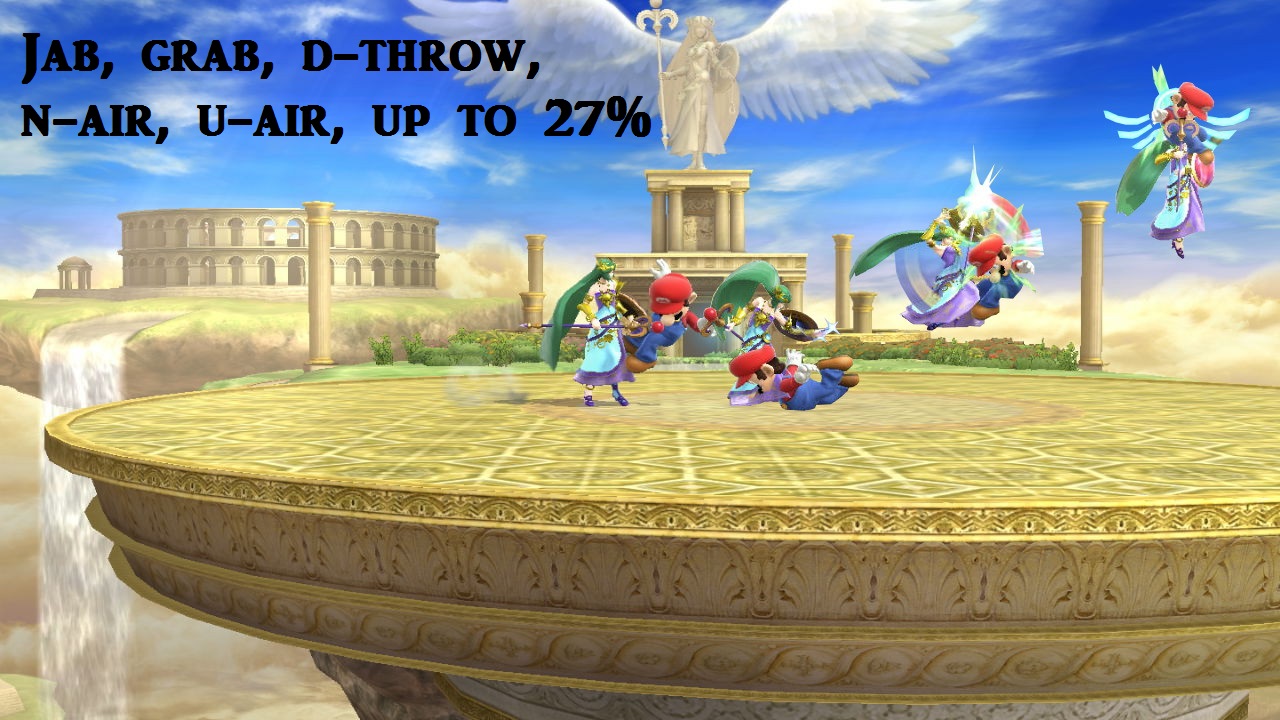 Another option if your opponent is low on damage is to d-throw, f-air, and then fast-fall to the stage and jab or grab your opponent just before they can touch the ground, allowing for another d-throw. A string like this can allow three grabs into d-throws with f-airs the first one or two times and a b-air or n-air into u-air at the end, dealing up to 47 percent damage! Obviously all of this varies depending on the skill of your opponent and how quickly your reflexes are, but it is possible as I’ve either done it before or seen it executed. 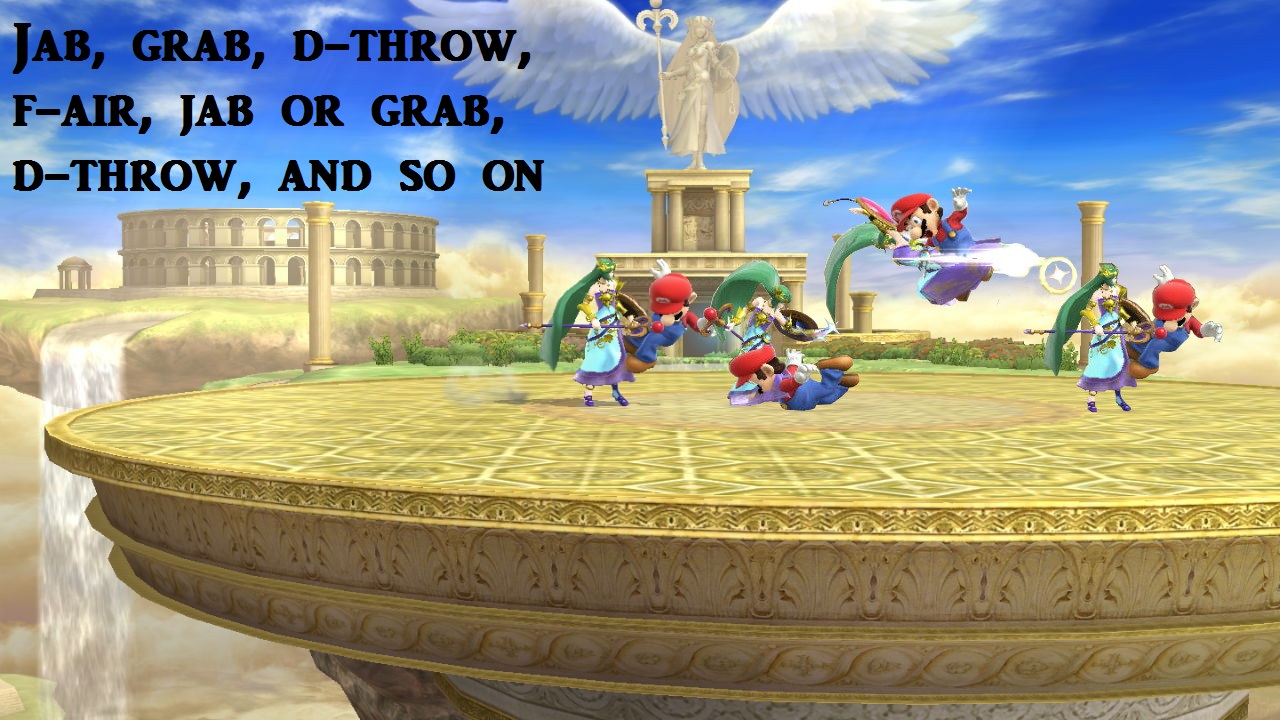 When your opponent reaches mid percentages multiple f-airs are possible off of the same d-throw, which combined with a fast-fall into jab can extend the string to 35 percent if done correctly. And not only that, Palutena’s n-air and u-air can cancel upon landing and drag your opponents down to the ground if the last hit of either doesn’t connect. This does not guarantee another attack, but it definitely can lead to one.

Alright, while that likely isn’t every string it’s most of the good ones, so let’s discuss what Lightweight can do for Palutena’s combos for a moment or two. If one is using Lightweight while your opponent is low on damage it actually makes some combos harder to pull off, but it makes chasing your opponent easier once they reach mid to high percentages; it also makes d-throw into b-air much easier, and the d-throw into n-air or u-air more guaranteed.

Combo strings on Mario (for example) like d-throw into n-air into f-air into u-air (while falling) becomes an option at mid percentages depending on rage and DI and such, and if the falling u-air lands on the ground even more can happen. The basic string does 34 damage, but another jab into a grab can rack up even more. And if your opponent falls out of the n-air behind you, try a b-air instead or use Super Speed behind you with an immediate jump into u-air.

In conclusion, I want to say Palutena has some weak points I’d like to see addressed in future patches, which are mostly covered over when Custom Moves are allowed. However, even on default the goddess of light still has potential to be really good when used correctly, and should certainly not be quickly dismissed as a bad character just because most people can’t use her properly. Pros like Aerolink, Nairo, IceNinja, and others can make Palutena look quite deadly. Like any fighter, you just need to learn what her best moves are and how to use them properly.

Eventually I hope to make a YouTube channel for my smash bros stuff, but until then I’ll continue to occasionally make guides and such. Thanks for reading this, and until next time happy smashing!
Likes: Underhill, CptJPuff, PHP and 3 others

You presented the combos very well, I might want to try playing Palutena for a while

Re4gNarsil
Thanks very much. I wish I could say I'm a pro, but even competitive casuals can still teach others a few things.
Nice presentation for Palutena's combos, overall. Pretty solid.
Read more…
Top Bottom