Hey everyone, seeing as how nobody seems to have made a guide detailing Palutena’s Hallehoohaw or Holy Ken Combo I figured since she’s my main and I feel she is very underrated I’d go ahead and make one myself with several percentages and some tips since these combos are some of the best kill options there are for Palutena players. Everyone knows about smash attacks and up-bs like ZSS’ and Zelda’s, but Palutena has options that can kill far earlier. If you wish to see videos of these combos in action check out Aerolink’s videos at TourneyLocator, who has one of the top Palutenas in the country (and quite likely the very best).

For those who don’t even know what these terms mean, or the combos they represent, the Hallehoohaw means using a d-throw followed by a u-air or n-air into u-air to kill your opponent off the top of the stage. The Holy Ken Combo is less well known and used less often due to its harder setup: it is Lightweight mode d-throw into f-air into d-air for the spike. Both combo strings have relatively small window of percentage where it connects consistently, and if you are outside of it it is still possible to pull it off with a mix-up but becomes more difficult or even almost impossible. These windows vary according to the size of your opponent.

After having seen Aerolink use both of these combos effectively I have been practicing on mastering them as well, and while far from finished I have learned enough to know both of these have many useful situations and potential for more follow-ups if they fail to take your opponent’s stock.

Just a few things to mention before going into the specific numbers. First of all customs have to be used for these deadly combos to work. I have provided some info on how early it kills without Lightweight, but the majority of this info assumes customs are allowed. Second, these numbers do not take rage into consideration, so if you have high damage you need to take that into account. Third, all this data was gathered on Smashville since that is such a popular stage choice for tournament settings. And fourthly, these experiments were done in training more, so the results do not take into account the Directional Influence (DI) of your opponent). Adding some extra damage should help with this factor.

Before we get to the data there is one final thing I need to mention: some characters have the tendency to fall out of your setups or are harder to combo due to the size of their hitboxes. Mario is lighter than someone like Bowser so it takes less damage to set up your combo, but Bowser is bigger so it’s easier to connect your attacks; if you try to n-air your opponent for an u-air and your opponent falls out behind you rather than in front try using a Super Speed behind you followed by a quick jump and u-air to still complete the combo. A way to try and avoid this dilemma is tapping or holding the back direction while using your n-air, which should cause your opponent to remain in front of you after the last hit connects, followed by holding forward again to get underneath your enemy for the follow-up. But enough delay, let’s get to the numbers.

Due to how high the Lightweight n-air lifts up your opponent, when your u-air connects you will be near the top of the stage so it doesn’t take very much to get your opponent over the top blast zone. 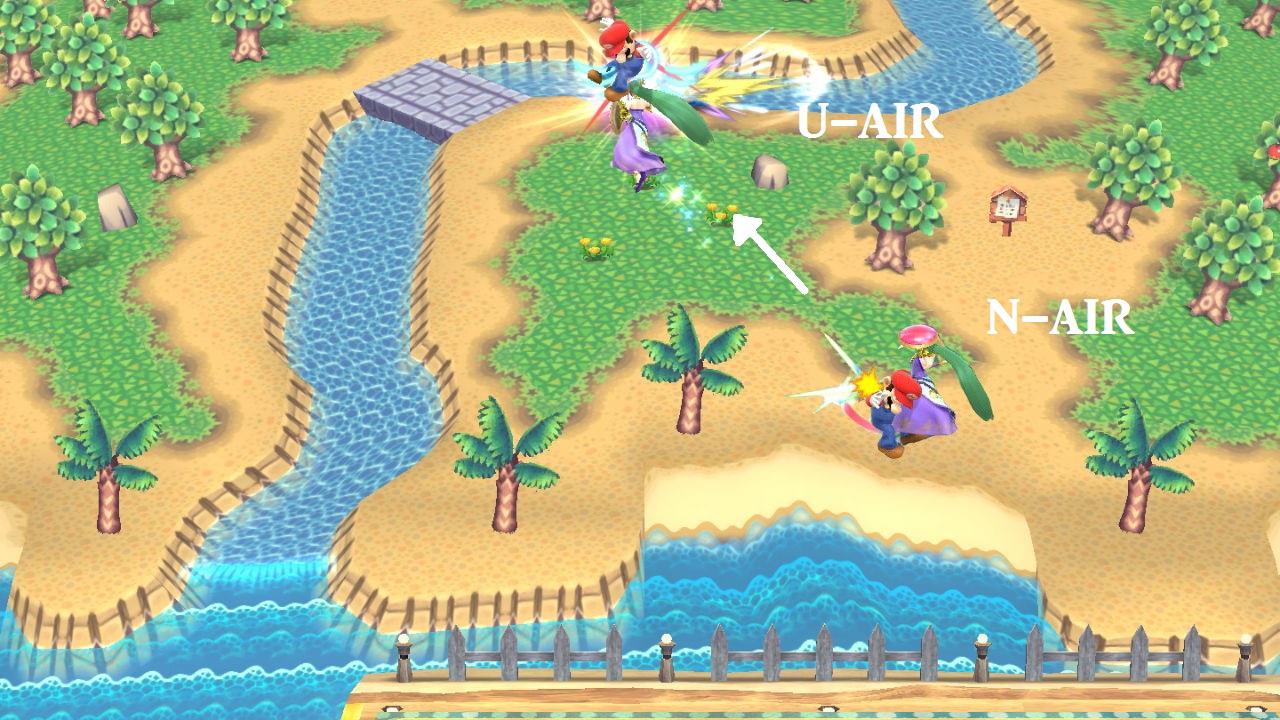 Characters such as Mario, Luigi, Peach, Palutena, Zelda, etc, reach the right percentage at 40 to 42 percent and have a window of roughly 20%

Heavier and larger characters such as Link, Pit, Robin, etc, can be comboed in this matter at 46 to 48 percent and have a slightly larger percentage opening

The biggest fighters like Ganondorf, DK, and Bowser need to reach 48 to 52 before they can die in this fashion, but have the biggest hitboxes so there is some room for error.

Lightweights like Mr. Game and Watch, Mewtwo, etc, can die super early at around 30 percent!

Due to how fast you are with Lightweight and how an opponent is stunned for an instant after being hit with an attack, f-air places your opponent at the perfect height to execute a d-air while they are helpless without even making a second jump. This allows you to drop down for another attack like a n-air or d-air before jumping back to safety. 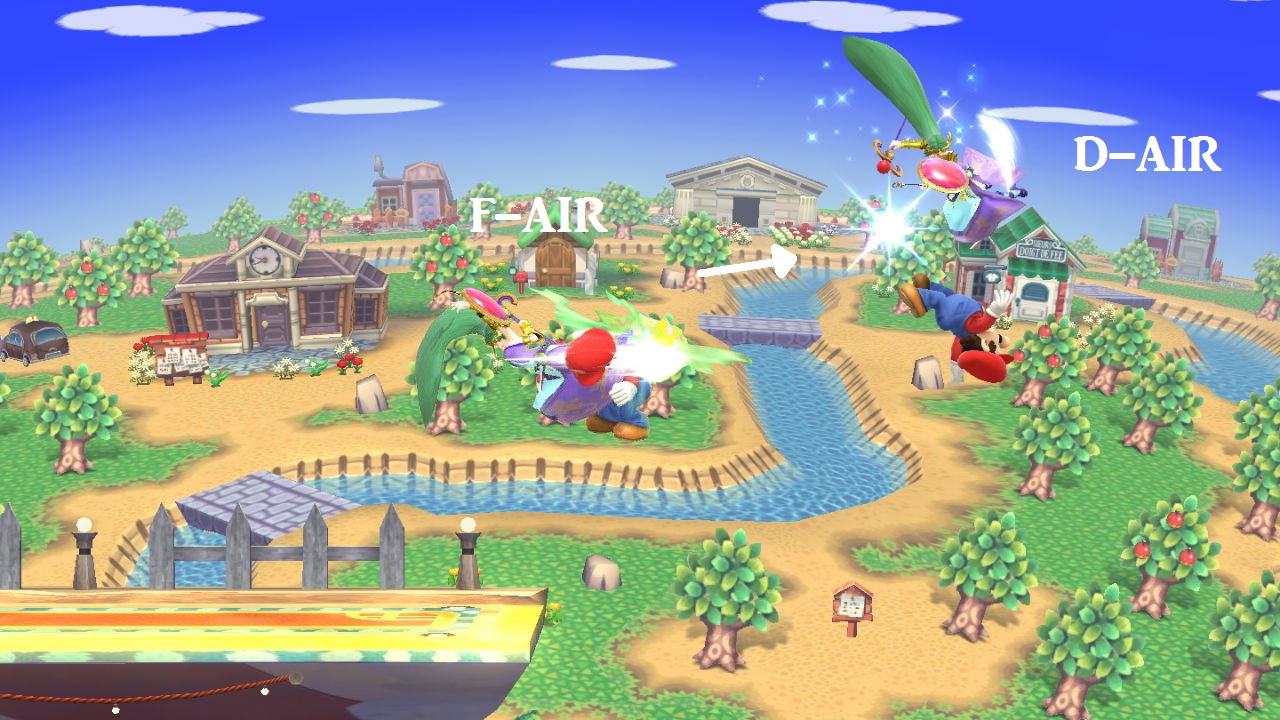 Characters such as Mario, Luigi, Peach, Palutena, Zelda, etc, reach the right percentage at 40 to 42 percent and have a window of roughly 10%

Heavier and larger characters such as Link, Pit, Robin, etc, can be comboed in this matter at 45 to 49 percent and have a larger percentage opening of about 15%

The biggest fighters like Ganondorf, DK, and Bowser need to reach 48 to 52 before they can be caught by this combo, but have the biggest hitboxes so there is much more room for error (roughly 20%).

Lightweights like Mr. Game and Watch, Mewtwo, etc, can be hit by the spike at around 34 to 36 percent, but likely won't die from it.

Obviously the higher the damage can be before performing a spike is preferable, because they'll fall farther before they can try to recover.

I know that’s not every character in the game, but this took quite a while to put together and this gives you enough data to go on for the time being; there’s a lot of ways of mixing up these combos in order to inflict more damage if that is your desire. The initial Helluhoohaw does up to 24 damage on its own, but if instead of u-air you go for a f-air and then an u-air it may not kill but will do a whopping 32 percent! The basic Holy Ken Combo does 29 damage initially, but if you drop down to hit your opponent with a n-air (assuming they live) that tacks on up to 10 percent more damage. Or if you want to take away their stock, go for another d-air to finish them off; either way, Lightweight plus up-b should ensure you’ll get back to the ledge if you have a jump left.

Well, I reckon that just about covers it; there is so much to learn if you want to main Palutena, but it’s definitely worth it. Hopefully this along with seeing the goddess in action inspires you to try her out if you’ve been considering it. Palutena has some shortcomings for sure, but her power and speed makes up for it. Thanks for reading this (it was long I know, but it needed to be), and happy smashing!
Likes: Thorny, Munomario777, deepseadiva and 3 others

Though I am looking for a combo guide without customs, I do like this guide.

Re4gNarsil
I am doing another guide at some point that has more combo strings using both customs and default.
Read more…
Top Bottom